Starting from studies on prion diseases, Dr Schneider’s work focuses on identifying common pathways and examining the shared biological mechanisms that cause neurodegenerative diseases. The team notably uses an inducible neuronal stem cell to investigate the mechanisms sustaining degeneration of neurons in prion and Alzheimer’s diseases. The team’s work paves the way to help the development of effective therapies against these pathologies.
Prion diseases
Transmissible Spongiform Encephalopathies, commonly known as prion diseases, are caused by tiny infectious particles called pathogenic prions (PrPSc). These are misfolded proteins that transmit disease by causing, in healthy tissue (notably in brain), the conversion of the non-pathological cellular prion protein PrPC into PrPSc, that is, the replication of the PrPSc-associated misfolded structure. This causes infected brain tissue to become spongy and riddled with holes. By provoking PrPC conversion into a diseased form, PrPSc corrupt the physiological function(s) of PrPC in neurons, which is at the heart of prion diseases.
Demystifying PrPC functions to unravel pathogenic cascades in prion diseases
It is thus essential to find the function(s) of PrPC in neurons, so that the mechanisms by which pathogenic prions exert toxic effects can be elucidated. However, PrPC normal function(s) largely remain(s) a mystery. To challenge PrPC role(s), Dr Schneider’s team has exploited a neuronal stem cell line (1C11) that expresses PrPC. Key to their approach is the identification that PrPC is a critical actor for the differentiation of the stem cell (the process whereby ‘blank slate’ stem cells specialise and develop into specific cells) into neurons and the regulation of neuronal functions through the control of diverse signalling effectors, including the enzymes TACE alpha-secretase and the Rho kinases (ROCK). When pathogenic prions PrPSc alter the regulatory action of PrPC, prion diseases could then form.
Dr Schneider follows this approach: exposure of 1C11 neuronal cells to pathogenic prions PrPSc. Neuronal cells infected by prions, that is, chronically replicating PrPSc, were instrumental in the team’s search for the nature and sequence of molecular events leading to neurodegeneration that take place in prion diseases. 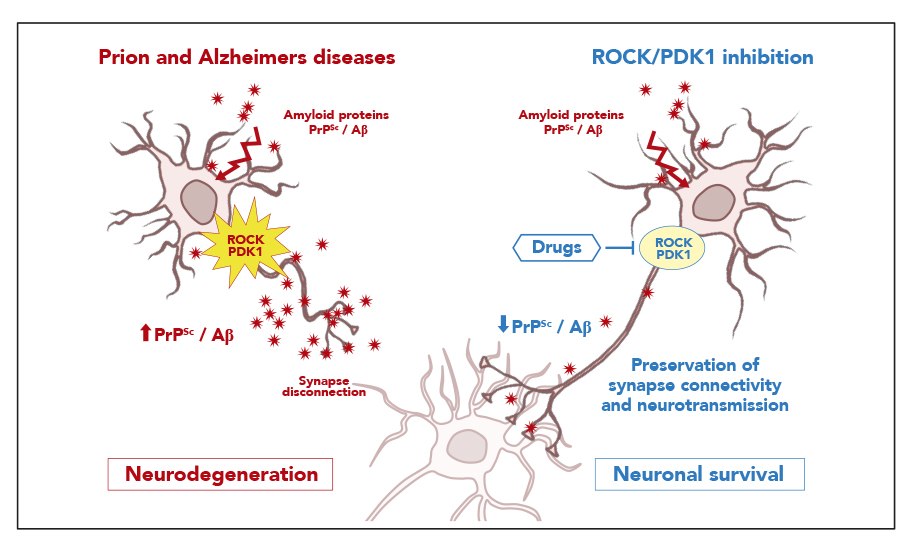 From this method, they found that over-activation of the kinase enzyme PDK1 (Phosphoinositide-dependent kinase-1) is important in prion-induced neurodegeneration because it stops TACE alpha-secretase acting. TACE, another enzyme, has neuroprotective qualities, which means it guards against some of the neurodegenerative properties of pathogenic agents like PrPSc. The suppression of TACE alpha-secretase activity preferentially allows the production and accumulation of pathogenic prions, and makes infected neurons sensitive to inflammatory stress. This is because the suppression of TACE alpha-secretase leads to a build-up of TNF (a critical mediator of inflammation and cell death) receptors, and makes cells vulnerable to TNF-induced inflammation. This finding has been validated in vivo in mice infected by pathogenic prions.
Application to other neurodegenerative diseases
Following the discovery that deregulation of the PDK1-TACE cascade in prion diseases leads to increased sensitivity to inflammatory stress and amplifies the production of toxic PrPSc protein, the team next investigated whether this same mechanism was present in other neurodegenerative diseases. Sure enough, they found that deregulation of the PDK1-TACE pathway also occurs in Alzheimer’s disease. The team was the first to show that the PDK1-TACE pathway is deregulated in Alzheimer’s neurons, where it increases the production of neurotoxic amyloid beta peptides (Aβ peptides). Aβ peptides are short chains of amino acids that are the main component in the Aβ plaques that form in the brains of Alzheimer’s patients.
Lastly, Dr Schneider demonstrated that inhibiting the PDK1 pathway mitigates prion and Alzheimer’s diseases in mice. This suggests that PDK1 could be a useful therapeutic target for both diseases – a suggestion supported by evidence that shows an increase in PDK1 activity in the post-mortem brains of Alzheimer’s patients.

Evidence shows an increase in PDK1 activity in the post-mortem brains of Alzheimer’s patients. This suggests that PDK1 could be a useful therapeutic target, not only for prion diseases but also Alzheimer’s

Finding the right treatment
Theoretically, a treatment could be developed that minimises the effect of PDK1 pathways. However, the problem is that the inhibitors used to suppress PDK1 pathways are toxic. This led the team to investigate the mechanism by which PDK1 becomes over-activated in diseased neurons.
In the case of prion infection, another kinase (ROCK) was shown to positively regulate PDK1 activity, so Dr Schneider’s team hypothesised that minimising the over-activation of PDK1 by suppressing the activity of ROCK, would indirectly reduce the effects of the PDK1 pathway. This would therefore make ROCK-PDK1 a prime target to combat prion diseases, and potentially Alzheimer’s as well.
Finally, how do neurotoxic Aβ peptides (in Alzheimer’s) or PrPSc (in prion diseases) trigger the over-activation of ROCK-PDK1 kinases? Dr Schneider and his team found that the cellular prion protein PrPC acts as a receptor for pathogenic prions and Aβ peptides at the neuronal surface, relaying their neurotoxicity and promoting ROCK-PDK1 over-activation.
A common cause
The interesting thing about PrPC is that it not only interacts with PrPSc but also Aβ peptides. Dr Schneider and his team suggest that the same principle applies to other amyloid proteins causing neurotoxicity implicated in diverse diseases such as Parkinson’s and Amyotrophic Lateral Sclerosis (ALS).
His team is currently trying to determine if the PrPC-ROCK/PDK1-TACE pathway is also corrupted in these diseases, and hence if they can find a common cause of neurodegeneration more broadly. If so, their next step would be to establish a common solution to amyloid-based neurodegenerative diseases, for which the causes of onset are still unknown.

How significant are your findings for combatting neurodegenerative diseases?
We were the first to show that overactivation of the kinase PDK1 and downstream neutralisation of the protective TACE α-secretase is a critical neurodegenerative event occurring in both prion and Alzheimer’s diseases, and probably in other amyloid protein-based neurodegenerative diseases. Importantly, neutralisation of TACE α-secretase by PDK1 considerably augments the production of neurotoxic proteins (pathogenic prions PrPSc in prion diseases and neurotoxic Aβ peptides in Alzheimer’s) creating a vicious circle of PrPSc/Aβ-induced deregulation of the PDK1-TACE cascade that amplifies PrPSc/Aβ production. Our work permits to posit PDK1 as an attractive, potential therapeutic target for both prion and Alzheimer’s diseases as the inhibition of PDK1 in mouse models with prion or Alzheimer’s diseases breaks down the vicious circle of PrPSc and Aβ productions, decreases PrPSc and Aβ neurotoxicity and thereby mitigates prion and Alzheimer’s pathologies. The therapeutic relevance of our data is supported by the rise of PDK1 activity in the post-mortem brain of Alzheimer’s individuals.
To date, there is no effective medicine to combat these neurodegenerative diseases. Most therapeutic approaches have failed or do not display significant improvements. This is notably because of our incapacity to diagnose the pathologies at early stages and thereby stop the neurodegenerative process very early. For example, therapeutic assays performed by different laboratories in prion-infected mice revealed beneficial effects when treatments were done (very) close to the prion infection date. The beneficial effects were, however, lost when the treatment started at later stages along prion pathology. Contrasting with those studies, our work on PDK1 clearly demonstrates that antagonising PDK1 activity in prion-infected mice at late stages (i.e., when the neurodegenerative process is deeply engaged) does exert beneficial effects in terms of locomotor activity and survival of diseased animals. Because of the late time-window of the beneficial action of PDK1 inhibition towards prion diseases, there is a rationale to transpose these results to the clinics. It however remains to suppress the toxicity of the PDK1 inhibitors.
How effective will ROCK-targeting therapies be if they only indirectly affect the PDK1-TACE pathway?
Targeting ROCK activity with pharmacological inhibitors permits considerable reduction in PDK1 activity and thereby restores the neuroprotective activity of the TACE α-secretase in prion-infected mice. The inhibition of ROCK reduces the brain level of pathogenic prions to the same extent as the direct inhibition of PDK1. However, the beneficial effect of ROCK inhibition in terms of animal survival was less pronounced with ROCK inhibitors than with PDK1 inhibitors. Because ROCK is a more upstream signalling effector than PDK1 in the signalling pathways governed by PrPC, ROCK would likely be involved in diverse signalling cascades distinct from the PDK1-TACE axis. Thus, the inhibition of ROCK may interfere with other key cellular functions and thereby minimise the beneficial effects associated with restoration of normal PDK1 activity. That is why we are currently focusing our research on how PDK1 neutralises the activity of TACE α-secretase in diseased neurons to get closer to the systems whose deregulation promotes the accumulation of neurotoxic amyloid proteins.
When do you anticipate you will be able to test your findings in human trials?
We already measured an increase of PDK1 activity in the post-mortem brain of six Alzheimer’s individuals at the five and six Braak stages of the disease. We provided evidence that the rise of PDK1 activity is associated with disturbance of TACE α-secretase protective activity. This indicates there is a therapeutic rationale to target PDK1 in Alzheimer’s patients to stop the production source of Aβ peptides by rescuing TACE α-secretase activity. However, the main unresolved problem still remains the toxicity of PDK1 inhibitors that we have to understand in order to envision safe therapeutic strategies.
What is the value of using 1C11 stem cells?
1C11 cells are neuronal stem cells established by Prof Odile Kellermann when she was researcher at the Pasteur Institute (Paris) in the lab of Nobel laureate Prof François Jacob. 1C11 stem cells display a stable neuroepithelial phenotype and can convert into either serotonergic or noradrenergic neuronal cells upon appropriate induction. The differentiation pathways are mutually exclusive and recruit 100% of cells. At the end of the neuronal programmes, the cells have acquired all the functional properties of brain mature neurons, i.e., serotonergic neurons of the raphe nuclei and noradrenergic neurons of the locus coeruleus. In 1C11-derived neuronal progeny, all neuronal functions can be quantified with accuracy. The creation of pure populations of stable mature neurons in vitro allows to bypass the multiplicity of signals that operate in vivo and to conduct “clean” biochemical and pharmacological experiments to decipher basic mechanisms underlying neuronal differentiation, regulation of neuronal functions or neurodegeneration. 1C11 cells are “test-tubes” useful to identify actors and signals involved in several pathophysiological situations that are then validated in primary neuronal cultures and in vivo.
What are the similarities and differences between Aβ peptides and prions?
Pathogenic prions PrPSc and Aβ peptides both derive from endogenous proteins: the cellular prion protein PrPC, whose transconformational conversion gives rise to PrPSc in prion diseases, and the amyloid precursor protein APP, whose abnormal cleavage augments the production of Aβ peptides in Alzheimer’s disease. Biochemically speaking, PrPSc and Aβ peptides are misfolded proteins that are enriched with β-sheets structures. This confers PrPSc and Aβ the capacity to assemble into oligomers and fibrils, to make deposits in the brain, and to resist some degradation processes. PrPSc and Aβ peptides both spread within the central nervous system along the time course of prion and Alzheimer’s diseases, respectively. The specificity of PrPSc is to be an infectious agent that has transmitted prion disease to humans after food ingestion, neurosurgical interventions (dura mater grafting), blood transfusion or medical treatment (growth hormone). While displaying “prion-like” properties, there is no convincing data supporting Aβ infectivity and transmission between humans.

Research Objectives
Dr Schneider’s research focuses on understanding the mechanisms behind several neurodegenerative diseases, including prion, Alzheimer’s and Parkinson’s diseases. His current research has looked at how the deregulation of the PrPC/ROCK-PDK1/TACE axis contributes to neurodegeneration, but he and his team have also been involved in research related to bone mineralisation and dental repair.
Funding 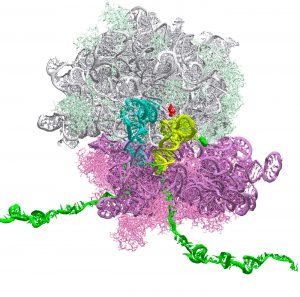 “Birdbrain” you say? Why thank you! 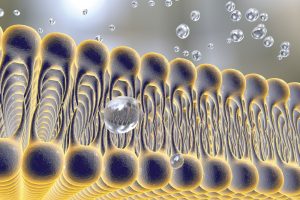