SARS-CoV-2 is particularly reliant on the viral enzyme Papain-like protease (PLpro) for its replication. The virus uses PLpro to modulate the host’s immune system to its own benefit and evade the antiviral innate immune defences, which will leave infected cells undetected. Dr Ewelina Weglarz-Tomczak and her team at the Swammerdam Institute for Life Science, University of Amsterdam, have identified the selenoorganic drug Ebselen and some of its structural analogues as potent inhibitors of the PLpro enzyme, displaying a great potential as prospective drugs for the treatment of COVID-19.

The pathological and epidemiological threat of a subset of coronaviruses causing severe respiratory diseases has been reported three times in the last 20 years. The 2002–2003 SARS outbreak (SARS-CoV-1) spread in South China, Hong Kong and Toronto, resulting in around 8,000 reported cases with a case fatality rate of 11%. Thankfully, the World Health Organization declared SARS-CoV-1 contained in July 2003. Middle East respiratory syndrome (MERS) is caused by the Middle East respiratory syndrome-related coronavirus (MERS-CoV). The first identified case of MERS occurred in 2012 in Saudi Arabia. Over 2,500 cases of MERS have been reported as of January 2021, including 45 cases in 2020. About 35% of patients diagnosed with MERS die from it. The exact origin of the 2019 SARS-CoV-2 outbreak remains unknown to this date, although the first cases of COVID-19 were reported in Wuhan, Hubei province, China.

Although vaccination programmes against COVID-19, the disease caused by SARS-CoV-2, started in many countries, finding an efficient antiviral treatment remains a challenge. Dr Ewelina Weglarz-Tomczak and her team at the Swammerdam Institute for Life Science, University of Amsterdam, study the roles of novel inhibitors and modulators against SARS-CoV-2 enzymes, with the aim of developing effective treatments against the virus. The Weglarz-Tomczak laboratory has extensively researched suitable compounds that may work as new antiviral drugs. Their research effort has led to identifying the inhibitors of cysteine protease enzymes that play a vital role in viral replication: Papain-like protease (PLpro) which is responsible for polypeptide processing during virus replication and plays an important role in the assembly of new viral particles within human cells. Proteases are enzymes specialised in breaking down very specific proteins into smaller peptide units, by cleaving peptide bonds between specific amino acids.

“Inhibition of the PLpro enzyme represents a highly promising strategy for the development of antiviral treatments against COVID-19.”

The “Achilles’ heel” of coronaviruses

SARS-CoV-2 is particularly reliant on the viral Papain-like protease (PLpro) for its replication. PLpro next to the Main Protease (Mpro), also known as chymotrypsin-like protease 3CLpro, plays an essential role in polypeptide processing and viral replication in coronaviruses. Additionally, SARS-CoV-2 uses PLpro to modulate the host’s immune system to its own benefit. Specifically, it alters host-cell proteins by the removal of ubiquitin and of ISG15. This fools the host antiviral innate immune response, which will leave infected cells undetected.

Inhibition of the PLpro enzyme represents a highly promising strategy for the development and design of antiviral treatments against COVID-19. Dr Weglarz-Tomczak and her team analysed the active site of PLproSARS-CoV-2 and its mechanisms of catalysis of PLpro in coronaviruses. Deep analysis of the active site led the team to conclude that small molecules with planar phenyl moieties are able to modify cysteine residues in the active site, a feature that indicates that they could act as effective inhibitors of the enzyme.

Ebselen, a low-molecular-weight organoselenium drug with very low toxicity, was identified as a suitable candidate, as there are no barriers to using it in humans as an antiviral drug. Ebselen has been studied extensively as an agent with therapeutic activity in neurological disorders and cancers. Ebselen is also known as an antiviral drug for the treatment of hepatitis C, the human immunodeficiency virus and other antimicrobial activity. Ebselen has been shown to alleviate inflammation and stimulate microbiome recovery in mice after antibiotic treatment.

The drug met the active site requirements for size and conformation, and also for the ability to modify the cysteine group. In a recent publication, Dr Weglarz-Tomczak and her team demonstrated that Ebselen inhibited the activity of PLproSARS-CoV-2 in the low micromolar range. The researchers determined the mechanism of inhibition of Ebselen as irreversible, with steady-state binding being achieved immediately. The team’s hypothesis was further corroborated by the use of molecular modeling to study possible binding modes of Ebselen with the enzyme. The analysis of the active site was based on the available crystal structure. The molecular docking model confirmed that Ebselen can sit deep in the active site of PLproSARS-CoV-2, finding itself in an optimal position to covalently modify the cysteine residue. The irreversibility of the reaction, confirmed experimentally, together with the data obtained by the molecular modelling studies, offers convincing evidence that the inhibition of the enzyme can be associated with covalent bonds that are formed between selenium from Ebselen and sulfur from a cysteine residue in the active site.

PLpro from SARS and SARS-CoV-2 are strongly related, with 82.9% sequence identity. Since PLpro is an important target for the development of antiviral drugs that inhibit viral replication in coronaviruses, Dr Weglarz-Tomczak and her team decided to compare the inhibition of PLpro by Ebselen from both SARS and SARS-CoV-2, finding that Ebselen’s potency was four times greater against PLproSARS-CoV-2. This observation follows previous results from the team suggesting that the de-ubiquinating activity is three times higher for PLproSARS compared to PLproSARS-CoV-2. The results correlate well with the fact that SARS is a more aggressive viral species than SARS-CoV-2 and leads to a faster development of disease.

“The Weglarz-Tomczak laboratory is the first research group to have identified inhibitors of PLproSARS-CoV-2 with nanomolar potency.”

The 12 structural analogues were found to be irreversible inhibitors of PLproSARS-CoV-2, and four out of the twelve inhibitors inactivated the enzyme at concentrations in the nanomolar region. The results obtained in the study were further illustrated by the authors with the use of molecular docking modelling. Although the modelled interactions do not show significant changes in the overall binding mode architecture compared with Ebselen, the introduction of hydroxyl (-OH) or methoxy (CH3O-) groups facilitate additional interactions with the active site increasing the inhibitory potency of Ebselen by one order of magnitude.

The team led by Dr Weglarz-Tomczak demonstrated that Ebselen, a selenoorganic drug that possesses a clean safety profile in human clinical trials, inhibits activity of the PLpro from SARS-CoV-2 in the low micromolar range. Moreover, four Ebselen derivatives bound to and inactivated the enzyme at concentrations in the nanomolar region. This finding is particularly significant as it makes the Weglarz-Tomczak laboratory the first research group to have identified inhibitors of PLproSARS-CoV2 showing potency in the nanomolar range. The compounds show high potential as prospective drugs for the treatment of COVID-19. 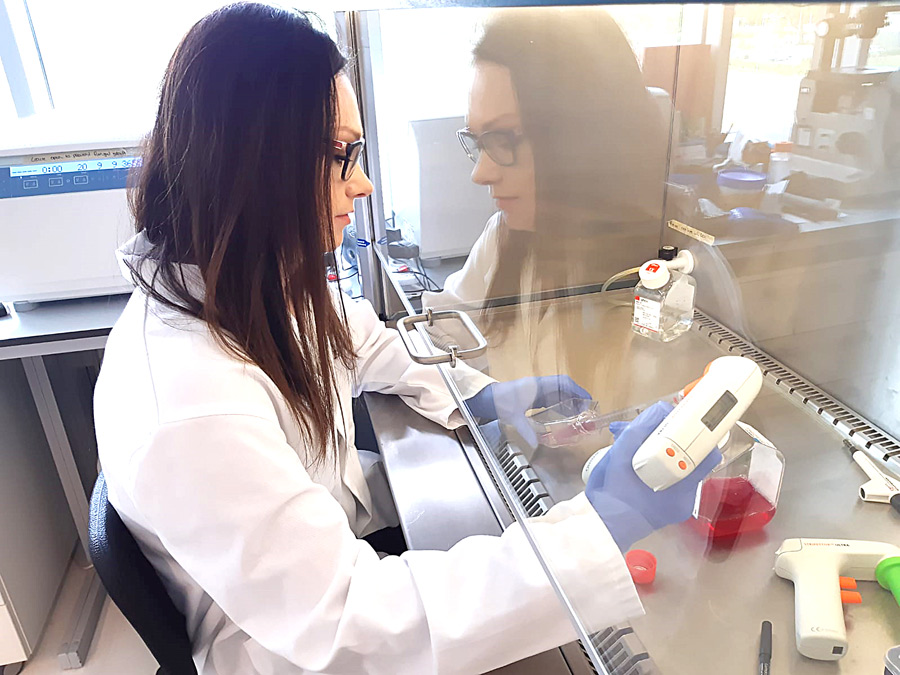 Do you plan to investigate the Ebselen derivatives in vivo in the near future?

An intensive study is currently underway to determine the activity of the compounds on human cells infected with SARS-CoV-2. However, the next and final stage will be human clinical trials. We believe our research will contribute to the development of anti-COVID-19 therapy.

Dr Weglarz-Tomczak studies PLproCoV2, essential for the progression of COVID-19 and a key target for the development of anti-COVID-19 drugs.

Dr Ewelina Weglarz-Tomczak is a biochemist, systems biologist and drug designer. Dr Weglarz-Tomczak received PhD with Honours from Wroclaw University of Technology, Poland. She worked at Synthetic Systems Biology Group in Swammerdam Institute for Life Science at the University of Amsterdam before joining the Molecular Biology and Microbial Food Safety, where she is a part-time Senior Postdoc/Principal Investigator.

Dr Weglarz-Tomczak’s research interests involve the study of how complex biological systems and their components function and evolve. Her current research focuses on two directions: 1) study isolated enzymes in order to modulate, analyse and discover their roles and novel inhibitors including proteases inhibitors against SARS-CoV-2; 2) biological networks where subunits are linked into a complex system in order to understand the mechanisms underlying living systems. It has included integration of the computational simulation with in vitro experiments on mammalian cell lines and biochemical assays.

A medicine of the person: The philosophy 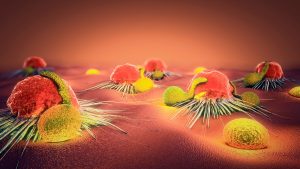 Cancer cells march to their own tune