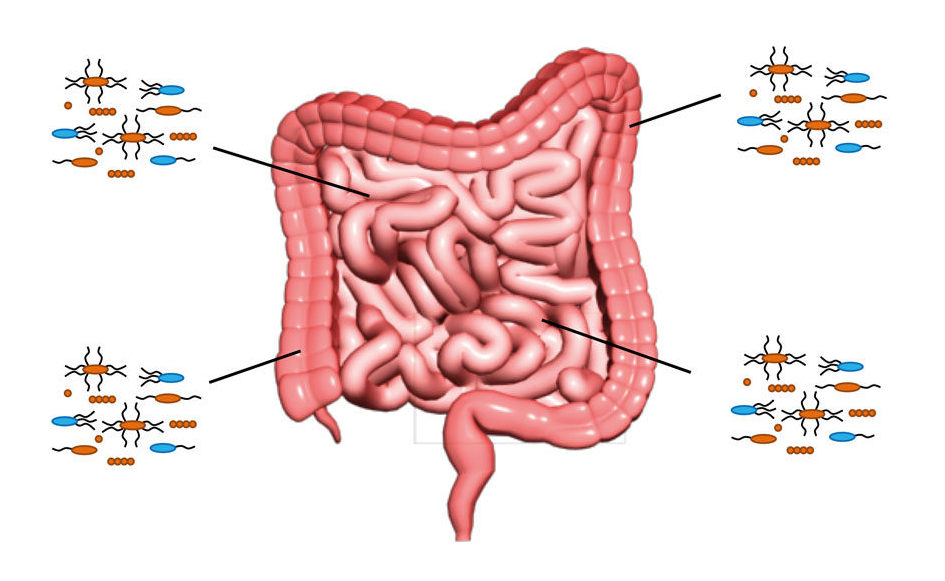 ArticleDetailDownload PDF
The human body is colonised by a vast number of microbes, collectively named the microbiota. The link between these microbes and our health is the focus of research for Dr Martin Kriegel at Yale School of Medicine. In an exciting new discovery, the Kriegel lab shows that bacteria found in the small intestines of mice and humans can travel to other organs where they trigger disease. Importantly, antibiotics or vaccines that specifically target the bacteria can reverse the disease, offering far-reaching public health implications.
There is a complex ecosystem deep within us that is home to a fantastic assortment of life. Called the human microbiota, this ecosystem is made up of trillions of cells, including bacteria, viruses and fungi. Our own personal ‘microbial worlds’ are rich in diversity; astonishingly, estimates suggest that there may be many thousands of species of microorganisms that survive and thrive within us. Recent studies suggest that there are at least as many microbial cells as human cells in our bodies, and in terms of genes, microbial genes outnumber human genes by a ratio of 100:1.

It is becoming increasingly clear that our overall health and well-being is profoundly linked to the massive population of bacteria that reside in our gut.

The vital role of our microbiota for health
These microorganisms that colonise our bodies – and their genetic material, the ‘microbiome’ – are essential for life. They have coevolved with us and live in an innate relationship with us that’s vital to normal health. The biggest populations of microbes reside in our gut where they aid digestion, prevent infection by pathogens, produce certain vitamins and educate our immune system on what to fight. Although it’s well recognised that the gut microbiota contributes to normal immunity, scientists are still unravelling the ways in which this can go wrong and lead to disease. Autoimmune disease in particular – one of the fastest-growing causes of disability and death in the US – has been strongly connected to the health of the human microbiota.
A case of mistaken identity
Keeping the immune system in balance is no mean feat; it must remain alert to spot and disarm foreign invaders but be smart enough to recognise the body’s own tissues and organs to spare them from attack. Autoimmunity can be thought of as a case of mistaken identity: the immune system reacts to its own tissues and cells as if they were pathogens. In healthy conditions, the gut microbiota does not provoke a pathologic immune response, even though our immune cells are constantly in contact with these microorganisms. In susceptible individuals, however, it is suspected that the microbiota may play a key role in kick-starting autoimmune disease. Exactly why and how this happens remains a mystery.
Changing this is Dr Martin Kriegel, Adjunct Assistant Professor of Immunobiology at Yale School of Medicine, who has devoted much of his career to understanding the influence of the microbiota on our immune system and autoimmune diseases. Research in the Kriegel lab aims to better understand the triggers and sustaining factors within the microbiota of autoimmune patients which are responsible for provoking the autoimmune process which leads to disease. The researchers are also interested in the influence of genetics and diet on gut microbial communities in autoimmunity, and the role of skin commensals in cutaneous lymphoma – a type of skin cancer for which there is currently no curative treatment. The overarching aim of this work is to develop novel and effective therapies for immune-related diseases.


Sick from your stomach
Excitingly, in a recent study Dr Kriegel and his research team showed that bacteria found in the small intestines of mice and humans can travel to other organs where they trigger an autoimmune response. Importantly, the team also found that this autoimmune reaction can be suppressed with antibiotic treatment or vaccines designed to target the bacteria. Recently published in the journal Science, these findings offer a new understanding of, and exciting promise for, the treatment of autoimmune conditions such as lupus and autoimmune liver disease.
To explore the link between gut microbial communities and autoimmune disease, the team looked carefully at an ordinarily harmless gut bacterium called Enterococcus gallinarum. In a series of elegant experiments using mice genetically prone to autoimmune conditions, the researchers discovered that the bacteria could spontaneously translocate; they moved from the gut to the liver, spleen, and lymph nodes. Once in these tissues, the E. gallinarum bacteria then stimulated the production of  auto-antibodies and caused inflammation – hallmarks of an autoimmune response. The team validated this mechanism of inflammation in experiments using liver cells of healthy individuals. They also showed that the E. gallinarum bacteria are present in the livers of patients with autoimmune liver disease and lupus but were not detected in livers from healthy controls.

Dr Kriegel’s ground-breaking research represents a novel paradigm for how autoimmunity can arise.

Notably, Kriegel’s group also demonstrated that they could suppress the autoimmune response in mice using either an oral antibiotic or a specific vaccine given in the muscle targeting E. gallinarum inside the body’s tissues. When the team administered other vaccines against different bacteria they found no change in death or autoimmunity of the immunised mice. Both the antibiotic and vaccine treatments suppressed the growth of the bacteria in the target organs and reduced the host’s autoimmune response, suggesting that they could reverse the effects of the bacteria on autoimmunity. This ground-breaking finding has exciting therapeutic implications, particularly for lupus and autoimmune liver disease, debilitating conditions for which there is currently no cure.
Molecular mimicry mediates autoimmunity
An ‘antigen’ is a substance which provokes an immune response and much of Kriegel’s research is directed towards exploring the vast pool of antigens presented by the microbiota. In particular, his lab at Yale has focused on the microbiota in the gut and other niches in the human body to test the concept of cross-reactivity in autoimmunity. If a microorganism within the benign gut microbiota possesses a structure that ‘mimics’ a host structure, then it is feasible that persistent exposure to this structure could lead to an immune response initially triggered by the bacteria, which over time may go on to cross-react with healthy tissue of a susceptible host, causing an autoimmune reaction.
In a recently published study, the team, in collaboration with the lab of Sandra Wolin, provide compelling evidence that cross-reactivity indeed occurs in lupus – a chronic, debilitating multiorgan autoimmune disease which is poorly understood. Lupus patients have high levels of antibodies to a substance called Ro60. In other words, their immune cells recognise Ro60 as foreign and start to mount an immune response to it. These Ro60 antibodies are raised early on in their disease, even before the onset of symptoms. Focusing on Ro60, the research teams looked for the presence of Ro60-containing bacteria in various tissues of lupus patients, and identified them in the skin, mouth and the gut. They showed that blood taken from lupus patients (containing Ro60 antibodies) could bind strongly to the Ro60 from commensal microorganisms. However, blood from individuals with no Ro60 antibodies did not bind. The team also showed that immune cells from lupus patients could be activated by Ro60-containing bacteria residing in the skin or gut, functionally demonstrating that the immune cells could cross-react with host as well as bacterial Ro60. To validate their theory in vivo (in a living organism), the team used germ-free mice, that is, animals without any bacteria of their own, and colonised them with a human Ro60 gut bacterium obtained from a human commensal culture collection of the Goodman lab at the Yale Microbial Sciences Institute. The mice developed an autoimmune response to human Ro60, supporting the idea that these microorganisms drive autoimmunity. They were also able to visualise Ro60-containing skin bacteria deep within skin lesions of several lupus patients. These findings open the door to potential therapies that target specific bacteria within the skin or gut microbiota, rather than the immune system, which is the current mainstay of treatment.
Future direction: from bench to bedside
Current work in the Kriegel lab aims to further unravel the cross-reactivity theory in antiphospholipid syndrome (APS), a potentially deadly autoimmune clotting disorder often co-occurring with other rheumatic diseases such as lupus and scleroderma. The cause of APS is currently unknown. However, Kriegel and his team hypothesised that a certain bacterium in the gut may be responsible through cross-reactivity of both immune cells and antibodies with bacterial antigens from this bacterium. APS patients have high levels of antibodies to a substance called β2-glycoprotein I, and the researchers showed in work presented at last year’s American Association of Immunologists meeting that cross-reactivity of the gut bacterial antigens with the patient’s own β2-glycoprotein I may be the underlying cause. In this project the researchers have been using sophisticated techniques and molecular biology studies to formally show cross-reactivity between the bacterial protein in the gut and the abundant self-antigen β2-glycoprotein I that circulates in the blood. They have thus unravelled a potential persistent trigger of pathogenic autoantibody production in genetically prone APS patients.
It is becoming increasingly clear that our overall health and well-being is profoundly linked to the massive population of bacteria that reside in our gut. Dr Kriegel’s ground-breaking research represents a novel paradigm for how autoimmunity can arise and serves as a solid foundation for development of new and effective therapeutic approaches aimed at the gut and skin microbiota.
Your discovery that gut bacteria translocate to other parts of the body and trigger autoimmune disease is very exciting! How close do you think we are to providing a treatment for autoimmune conditions that can target the gut bacteria?
The microbiota is indeed an exciting area to think about new, personalised treatment options. We first would want to determine how prevalent the target bacteria are in different patient cohorts and define who would benefit most from removing them. Trickier will be to develop the best way to deplete them from the patients’ microbiomes. Approaches in humans may still take years to develop but could include more selective antibiotics than currently available, a vaccine approach as we have tried in animals, or using specific viruses that kill off bacteria, so called bacteriophages. All of these approaches would theoretically be useful to eventually try in autoimmune patients colonised with translocating bacteria.

Research Objectives
Professor Kriegel’s work focuses on the role of the gut and skin microbiomes in autoimmune diseases.
Funding 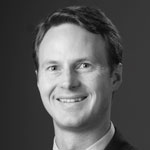 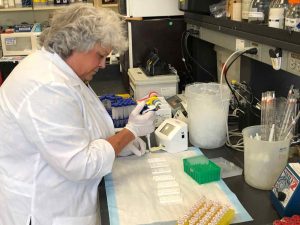