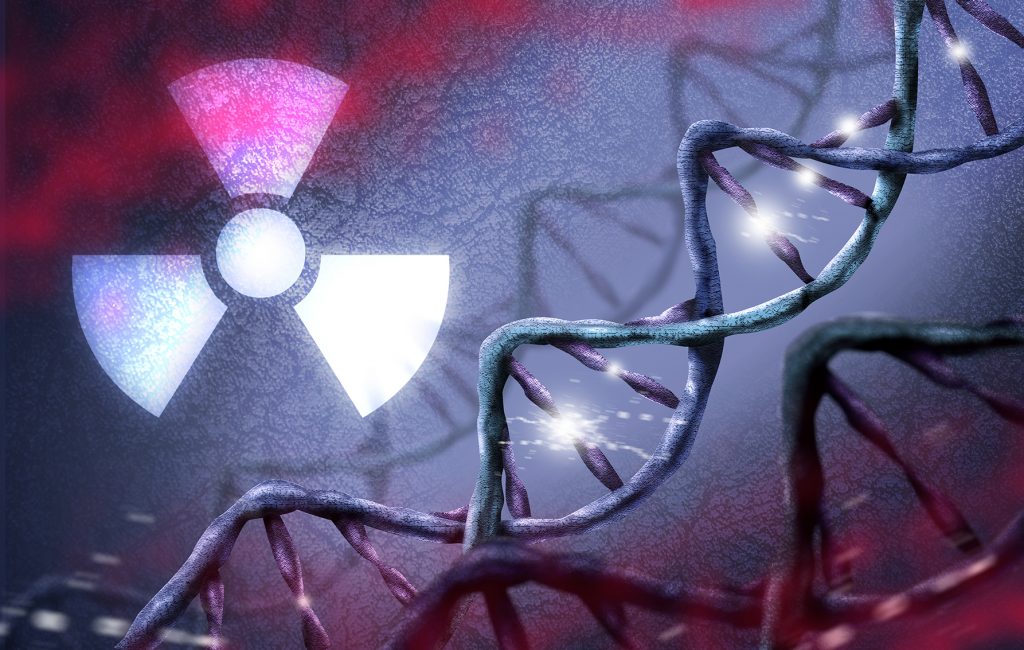 ArticleQ&ADetailDownload pdf
Proton beam therapy offers the potential to treat cancerous tumours without damaging the surrounding tissue. Dr Steven Vigdor, Professor Emeritus of Physics at Indiana University, hopes that his new venture, Phenix Medical LLC, will bring this technology closer to the patients it can benefit. The company develops cutting-edge instrumentation to aid in the delivery of ion and proton beam radiotherapy.

Proton beam therapy is a type of radiotherapy that targets tumours with beams of radiation to treat cancer. However, rather than using x-rays, which can damage surrounding tissue, proton therapy uses positively charged sub-atomic particles, protons, to destroy cancerous cells. 30% of patients receiving radiotherapy would benefit from proton or ion beam therapy instead of the conventional x-ray therapy they already receive. However, this type of therapy is not widely available.

Cost has previously been the major limitation in delivering this treatment on a large scale – the facilities required were in the past exceedingly expensive and consequently there are relatively few in operation. However, new technologies are bringing costs down and the number of radiotherapy clinics offering this type of ion beam and proton treatment is increasing by 16% per year globally. 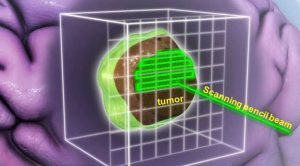 Recent improvements that have been made include the upgrade to intensity-modulated proton therapy via pencil beam scanning (PBS), and the use of compact superconducting pulsed beam accelerators such as synchrocyclotrons. PBS is a method that delivers the required dose of radiation to the tumour extremely precisely.

Protons for the treatment are produced with a particle accelerator, which can deliver particles in a continuous beam, or in pulses of controlled intensity and duration. Pulsed beam technologies can deliver an instantaneous beam current hundreds or thousands of times greater than continuous beam technologies. The use of synchrocyclotrons can reduce operating costs and makes full automation of this technology possible. 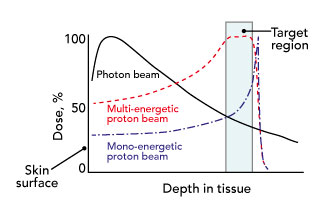 The advantage of PBS becomes clear when you look at a tumour in three dimensions. PBS can deliver radiation over a very narrow range at fixed beam energies. This means that tumours can be targeted precisely, and that damage to surrounding healthy organs and tissue can be limited.

This is because the tumour is ‘painted’ in 3D by scanning the volume with a beam, tuned to find the exact depth and lateral position of the tumour. The intensity and energy of the beam are adjusted continuously during each scan to deliver a radiation dose precisely tailored to the size and shape of the target tumour.

[Pencil beam scanning reduces] the toxicity, time and
cost associated with individual treatments, and improves the range
of tumours that can be targeted

The technique improves the clinical outcomes of therapy by reducing the toxicity, time and cost associated with individual treatments, and improves the range of tumours that can be targeted, including ones in close proximity to critical healthy organs.

The Gas Scintillation Detector
For pencil beam scanning technology to work effectively, it is important that the amount (dose) of energy being delivered is accurately measured as a function of beam position and beam energy – this process is called dosimetry.

To measure dosage, most technologies use air ionisation chambers. These measure direct ionisation in an air-filled chamber by applying an electrical field. However, these are not precise at high dosage rates because ions recombine in the chamber, creating non-linear effects (i.e., when the output signal no longer changes in strict proportion to the delivered dose) that are difficult to quantify to the precision of which pencil beam scanning is capable. It is highly desirable to minimise this non-linearity for as long as possible, by developing dosimeters that operate at much higher dose rates before they exhibit this behaviour.

Scintillation is a process whereby particles are excited by incoming radiation and re-emit the absorbed energy in the form of light. Phenix Medical have developed a gas scintillation detector (GSD) that monitors radiation dosage in real time, with precision of 1% over large areas up to 30 cm x 30 cm. They have shown that the GSD dose measurement has an extremely high resolution: up to a few hundred microns (a thousandth of a millimetre) in the spatial dimension and tens of microseconds in the temporal dimension.

This is possible because they measure the de-excitation of gas molecules on the nanosecond (one billionth of a second) scale, and because they use xenon, which gives off lots of scintillation light (meaning it is easier to measure) and re-absorbs very few of the photons it produces.

Testing the waters
Dr Vigdor and colleagues have performed several tests to confirm that their prototype delivers at sufficiently high precision. Because the technology is so cutting-edge, there were no clinical facilities yet available to test the prototype instrument that used PBS with pulsed beam accelerators, so they tested the GSD using continuous beam therapy PBS and, separately, pulsed-beam accelerators without beam scanning.

They first tested the spatial resolution and dose accuracy of the beam scans. The effects of gas contamination and impurities were determined by slowly adding carefully calibrated amounts of dry air into pure xenon at atmospheric pressure. They found that the effects were negligible if the contamination was less than 0.5%, achieved by keeping the xenon chamber tightly sealed. Above this level, the accuracy and precision of the dosimeter was significantly reduced.

After making small corrections for background noise and loss of charge during resets of the readout electronics, the team were able to verify that the GSD technology was able to produce the required spatial and temporal precision to measure dosage. Indeed, GSD is able to meet the requirements of the US DOE, NIH and National Cancer Institute that: “A spot size less than 5 mm FWHM at isocenter should be achievable for all ion species at all energies … Position accuracy pulse-to-pulse should be within ±0.2 mm and should be monitored during beam delivery.”

Perhaps most importantly, they also measured non-linear effects driven by light production in the scintillating gas, adjusting where necessary to minimise these. Whereas air ionisation chamber-based dosimetry is associated with ion–ion recombination, and therefore non-linear behaviour above a certain threshold (130 nA/cm2), these tests indicate that the GSD response remains linear at this level, and at much higher intensities. With new pulsed beam accelerators, the beam intensities may be very high (>1μA/cm2), so this is an encouraging result. Further testing will be necessary to confirm this behaviour once more facilities come online.

Further developments
The Phenix Medical team aims to improve the technology further by building software to detect and correct problems with the beam in real time and improve specific aspects of the instrumental design, such as the windows through which the beam enters and exits the instrument. Further testing is required but they hope that their GSD will be able to facilitate extremely high precision PBS proton therapy, with consequent benefits for patients.

How has your background as a nuclear physicist helped you develop GSD?
The issues critical to the development of next-generation dosimetry – improving device precision, speed of response and spatial resolution – are also central to the development of state-of-the-art detectors for particle and nuclear physics. My long experience in the latter fields means I am aware of the latest technologies, and able to choose the one best suited to the clinical environment of a proton beam therapy centre.

What motivated you to work on this particular type of technology?
We chose gas scintillation because of its intrinsically fast response time and its lack of reliance on ionisation of gas molecules, thereby removing the non-linear behaviour caused by ion recombination effects. We were then able to achieve the desired high spatial resolution by collecting the scintillation light in a modest number of photo-detectors, keeping the cost of the dosimeter down to a level competitive with alternative technologies that deliver poorer performance.

Where do you see this technology going in future?
Because air ionisation chambers are the current industry standard, the gas scintillation approach will probably see its greatest application as secondary dosimeters generally required by regulatory agencies. It will provide much higher spatial resolution and better linearity than the primary dosimeters, and comparable dose measurement accuracy with different sensitivities to possible changes in beam characteristics or environmental conditions. Our tests with clinical beams to date have successfully demonstrated the expected performance levels of the technology. So, what remains are basically the engineering challenges of adapting the GSD design to fit within the dose delivery system constraints at specific clinics.

Are your developments driven by improvements in PBS, or vice versa? Or is it more of a joint advance?
The improvements to pencil beam scanning technology are already under way. The first patient treatment with this approach using a pulsed beam accelerator began in Nice, France in September 2016. Several additional new clinics combining PBS with pulsed beams and very high instantaneous dose rates will be launched within the coming two years.

Our developments have been driven by anticipating the need to deliver real-time dosimetry whose precision matches the capabilities of these new therapy centres, where treatment delivery depends on the proper operation of a great deal of beam delivery hardware and software that can develop glitches or more serious problems. The clinical needs require combining fast detector response, high dose accuracy and linearity, and excellent spatial resolution in a cost-effective dosimeter package.

How much of a difference do you think this technology will make to cancer therapy?
As costs are coming down, the proton therapy field is growing rapidly. Pencil beam scanning will soon dominate the methods of beam delivery because it offers the greatest precision in sparing healthy tissue surrounding a tumour. Ongoing improvements in treatment planning, beam delivery, tumour imaging and allowance for organ motion during treatment all promise to increase the fraction of radiation patients treated with proton or ion beam therapy from the current 1% toward the 20–30% who might benefit from this more precise form of treatment.

But these improvements must be matched by comparable improvements in dosimetry technology, in order to verify that the precisely tailored radiation dose is correctly delivered. This is where the GSD technology comes in: it can be an essential component of the overall improvements that bring proton therapy to a much wider range of patients over the coming decade.

Research Objectives
Dr Vigdor’s work applies his background in physics to a medical setting, helping to develop technology that facilitates the treatment of cancer.

Collaborators
The research was carried out in collaboration with Keith Solberg (who was Principal Investigator on the NIH grant) and Alexander Klyachko of Phenix Medical LLC, and with aid from Dr Mark Pankuch of the Northwestern Medicine Chicago Proton Center. 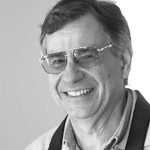 Dr Steven Vigdor is Professor Emeritus of Physics at Indiana University, where he taught and carried out fundamental research in experimental nuclear physics for 31 years. In 2007 he became the Associate Director for Nuclear and Particle Physics at Brookhaven National Laboratory on Long Island, New York. After retiring from Brookhaven, Vigdor returned to Bloomington, Indiana in 2013, where he joined his former colleague John M Cameron in launching a small business, Phenix Medical LLC, focused on developing state-of-the-art instrumentation to support new clinics delivering proton and ion beam radiotherapy. Vigdor is also working on a book to provide an experimentalist’s account of ongoing efforts to explore the physical fine-tuning that allows life to exist in our universe. 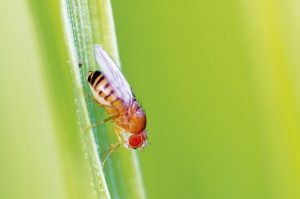 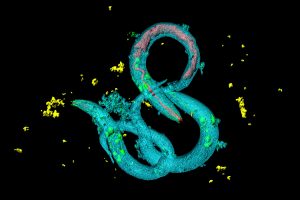 At the intersection of the nervous system and innate immunity 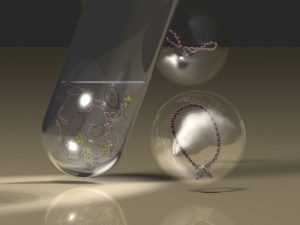