Aerial topdressing – the aerial application of fertilisers over farmland using specialist agricultural aircraft – is an integral part of New Zealand’s agricultural heritage. The procedure was born and developed there, so it makes sense that New Zealand researchers are behind much of its development. Dr Miles Grafton and Matthew Irwin from Massey University on North Island, believe that increasing the efficacy of aerial topdressing is possible by reducing the role of a currently crucial part of the procedure: the pilot.

New Zealand is a sparsely-populated country – it is home to just over five million people, yet it boasts more than three-and-a-half thousand airstrips. Most of them are on farms supporting the country’s larger population of over 36 million livestock. The airstrips form part of the operations of over a hundred aerial seeding and crop-spraying aircraft operating daily in New Zealand. Traditional fertiliser application methods, such as vehicles and other land-based machinery, are problematic because the country is anything but flat – much of it is mountainous or volcanic. Hence the need for aircraft. But because farms can be highly undulating and interspersed with rocky outcrops and waterways, some airfields are challenging to access. Any pilot servicing these farms requires skill, nerves of steel, and a remarkable sense of timing if they are to find their mark when aerial topdressing. A new, computerised delivery system promises to deliver pinpoint accuracy without the need for the pilot’s expertise. A team of researchers from Massey University on New Zealand’s North Island were commissioned to test it. 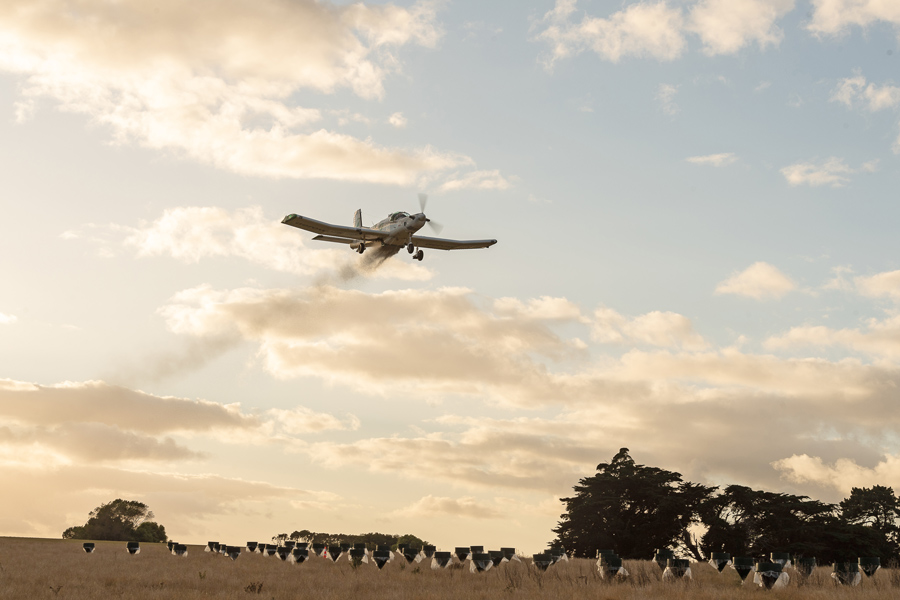 Dr Miles Grafton is a senior lecturer at Massey University with a particular interest in aerial topdressing. He used to work for Wanganui Aero Work Ltd, one of New Zealand’s many agricultural aviation companies. In 1998, while still with Wanganui, he met Michael Manning of Ravensdown Ltd, a major manufacturer and distributor of fertiliser. Their discussion soon turned to one of the quirks of sheep farming: the soil fertility on large sheep farms generally decreases with distance from a landing strip. Economics is essentially the reason – the cost of using aerial topdressing depends on the distance an aircraft travels or its time in the air. As a result, bulk solid fertilisers (usually single superphosphates) dropped in particulate form from aircraft aren’t delivered effectively. Delivery also relies on human calculations – the pilot triggers the release of the fertilisers. Grafton and Manning wondered if a computer wouldn’t do a better job.

“All the systems work simultaneously, and it is computationally intense, especially considering the aircraft’s speed and the terrain complexity.”

Six years later, Ravensdown bought Wanganui Aero Work to spearhead the development of a computerised aerial topdressing system called IntelliSpread®; its purpose is to deliver the correct fertiliser rate at the right place at the right time. This is easier said than done because blanketing a farm with a single dose of fertiliser from an aircraft is ineffective. Plant production – whether crops or animal feed – on an area of land varies depending on slope, aspect, elevation, topsoil depth, nutrient status, moisture, and temperature. Hence the need for a variable rate of application of different fertilisers. But then there are the delivery variables to consider: the aircraft’s speed and height, the wind speed and direction, the rate controller speed of the aircraft’s fertiliser delivery system, and the nature of the fertiliser, especially the particle ballistics. Finally, there are the variables of the delivery area. New Zealand’s farms sit among environmentally sensitive areas such as indigenous forests and waterways, making precision spreading essential.

IntelliSpread is actually a combination of systems – a geographic information system (GIS) reflecting what is on the ground, a proprietary farm-mapping system, the aircraft’s GPS, and its fertiliser delivery system. A farmer uses the GIS to delineate the areas to be fertilised, using which fertiliser and how much. Off-target areas – such as environmentally-sensitive areas – are also identified. The system translates this data into a polygon – a multi-sided 2D figure – using matrix array mathematics. Other data such as the wind speed, fertiliser type, and particle size, help complete the necessary ground-condition variables. This means that the onboard system has a clear idea of the project when the aircraft takes off. Once airborne and operational, the system integrates the aircraft’s GPS data, speed and height, adjusting the fertiliser delivery. All the systems work simultaneously, and it is computationally intense, especially considering the aircraft’s speed and the terrain complexity.

To assess the accuracy of Ravensdown’s IntelliSpread system, Grafton, Irwin and colleagues created a 100m x 18m test area on a farm airfield, within which they placed 126 funnel-shaped collectors to catch bulk fertiliser particulate dropped by an aircraft. The collectors – lined with bubble wrap to reduce particle bounce – were arranged in 11 rows, evenly spaced down the length of the test area, with six collectors in each row. Rob Murray of Ravensdown used IntelliSpread to divide the test area into two zones – a target area and a non-target area – separated by a virtual fence representing a boundary halfway down the test area. The hypothesis was that if the system was as accurate as claimed, it should compute all variables and turn the fertiliser delivery on or off as it recognises its position relative to the boundary (fence), so that test-area collectors in the non-target area would remain empty. Furthermore, fertiliser dropped in the target area should be evenly distributed among the collectors. 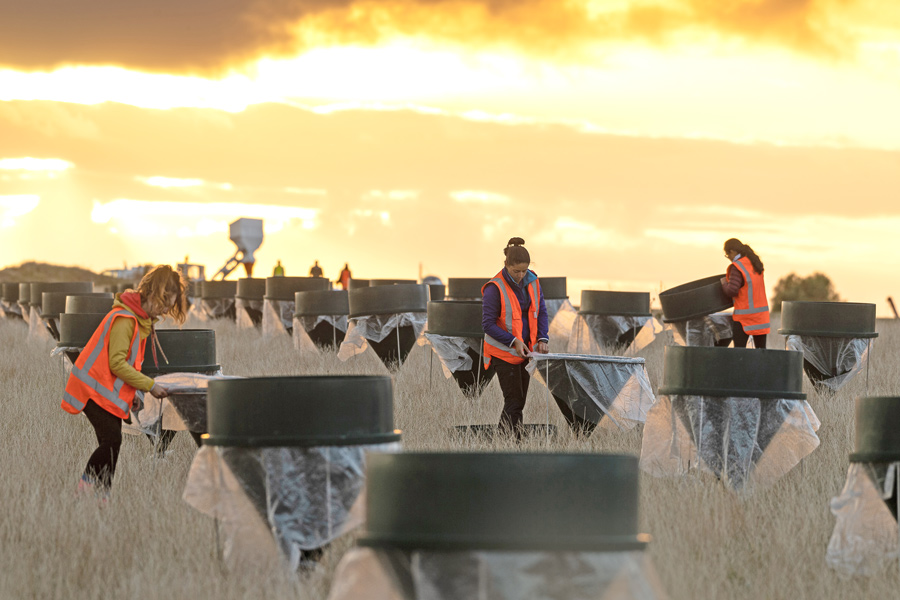 In each scenario, the IntelliSpread system identified the boundary and reacted within half a second of flying time. By factoring in flight speed and the aircraft’s position in relation to the boundary, it either switched on or off or adjusted particle dispersion 30m away from the boundary. The result: no fertiliser fell inside the non-target zone. Furthermore, the spread of the fertiliser was sufficient for it to be considered effective. There was a slightly higher proportion in collectors to the south of the test area in all three tests – a likely outcome of the northerly wind blowing on the test day.

Computer technology is an increasing feature of modern farming. Grafton and his team’s research gives impetus to what is becoming increasingly clear: if safety and efficacy are essential in aerial topdressing, a pilot should focus on the flying, and a computer system can handle the rest. 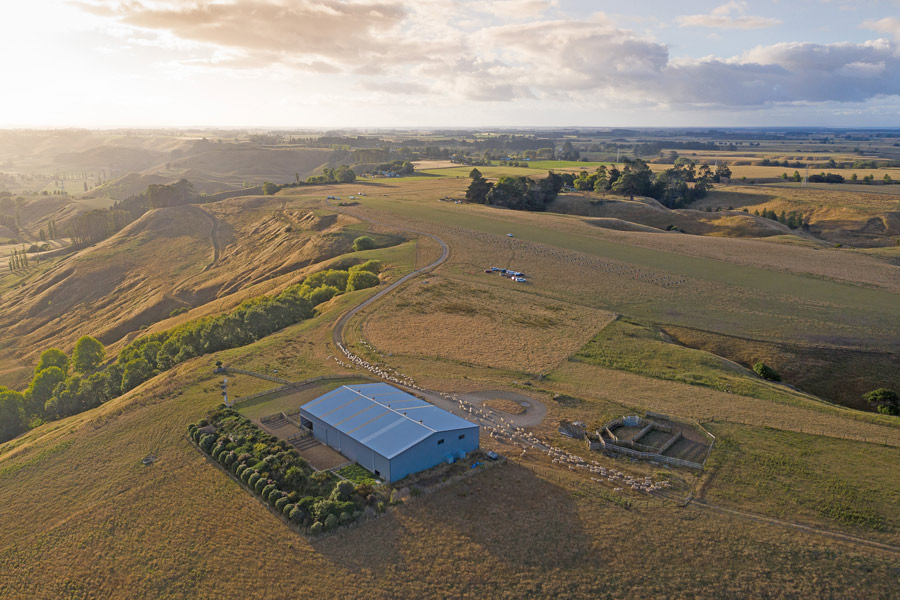 Your research points to the clear benefits of the system; what opportunities for improvement, if any, did you identify?
Currently flow rates and wind compensation are based on algorithms, albeit they were developed as part of Dr Sue Chok’s PhD dissertation at Massey University. Her work, which was financed by a Ravensdown Ltd scholarship, improved the accuracy of early systems.G meters (which weigh the load and compensate flow to the gravitational pull of the aircraft) have been tried and failed due to the acidity of single superphosphate (pH <2), so a means of measuring flow rates using sound – known as Helmhotz resonance – is now being considered.

The efficacy of wind-compensation algorithms is the next regime to be tested. It is recognised that wind speed and direction change frequently, but the system should protect sensitive environmental areas. 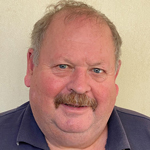 Miles Grafton is a senior lecturer at Massey University. He teaches agricultural engineering and farm management at undergraduate level. He currently supervises some PhD research in horticulture, using remote sensing and statistical analysis, in conjunction with Matthew Irwin, a senior tutor at Massey University. 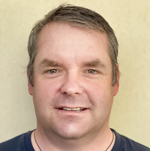 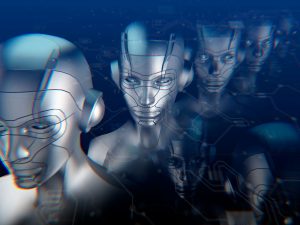 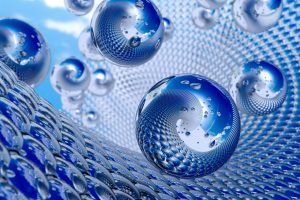