No parent should have to bury their child, yet parents who experience multiple adversities and poor social determinants of health have a relatively higher chance of losing their child compared to those who do not. Sudden unexpected death in infancy, or SUDI, is the leading category of death after the first month of life, and it usually happens when babies are sleeping. Infants are more likely to die suddenly and unexpectedly between the ages of 28 days and six months, with unsafe sleep environments associated with the majority of these deaths. Modification of unsafe sleep environments therefore provides a focus for possible intervention. One such intervention in Australia and New Zealand, the Pēpi-Pod® Program, is literally saving lives.

Among those spearheading the program is Professor Jeanine Young of the School of Nursing, Midwifery and Paramedicine at the University of the Sunshine Coast in Queensland. Young is a registered nurse, midwife, and neonatal nurse who has provided nursing and midwifery care for parents who have lost their children. Consequently, she is particularly interested in developing interventions which are culturally acceptable and practical, but which also address the multiple disadvantages experienced by families with social vulnerabilities who experience the greatest burden of infant mortality.

SUDI & SIDS
Sudden unexpected death in infancy (SUDI) is a broad term that includes all sudden and unexpected deaths of infants less than 12 months old – this current definition includes sudden infant death syndrome (SIDS) and deaths caused by asphyxia or of an undetermined cause after a thorough investigation, including performance of an autopsy and review of the circumstances of death and the clinical history. Krous et al (2004)

In Australia, that burden is heaviest in the northeastern state of Queensland, which has a higher-than-national-average infant mortality rate. SUDI is disproportionately higher among Aboriginal and Torres Strait Islander peoples, the First Nations peoples of Australia. Sharing sleep or bed-sharing is a valued part of Aboriginal and Torres Strait Islander cultures, especially during child-raising: infants frequently share a sleep surface with their family members, usually parents and siblings.

“In areas where the Pēpi-Pod® Program achieved the highest level of community participation within the target population, there was a 75% reduction in infant mortality.”

During the first six months of life, an infant’s unique anatomy and physiology make them particularly vulnerable to the risk of suffocation posed by sleep environments which may cause their airway to become blocked. In specific contexts, sharing a sleep surface with a baby can increase the risk of SUDI. Infants at greater risk of suffocation or breathing difficulties during sleep include those born to mothers who smoked during pregnancy or who live with family members who smoke. Similarly, infants with low birth weight or those born prematurely are more vulnerable to SUDI. Accidental suffocation is also higher where caregivers have consumed alcohol, medications, or substances which may make them less responsive to a baby who is sharing the same sleep surface. The challenge for families who culturally value shared sleeping or who find it to be a practical infant-care practice that aids breastfeeding and settling is to create a safer sleep environment around the baby where they choose to, or may have no option but to, share a sleep surface with their baby. This is where the Pēpi-Pod® Program comes in. 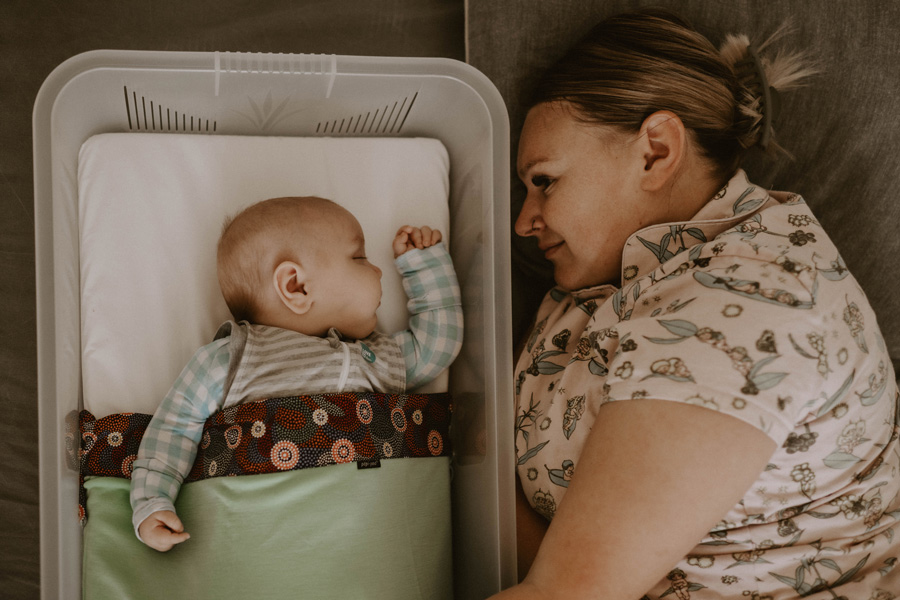 But the Pēpi-Pod® Program is more than a portable sleep space. It has three core elements: a dedicated portable sleep space suitable for use in the caregiver’s bed, personalised education about infant breathing, and an invitation to families to share what they learned with their own social networks. Parents and caregivers are engaged in a program that raises awareness of the unique needs of infants and how to protect their breathing. The focus is on the protection of breathing, not the risk of death, while caregivers are active participants rather than recipients of a product. The primary aim is to decouple smoke exposure and shared sleep, which was associated with the largest proportion of SUDI deaths. The initial rollout was part of New Zealand’s Safe Sleep Program that started in 2011 and was vital in reducing the country’s infant mortality rates, significantly closing the Māori–non-Māori infant mortality rate gap.

Young reached out to Change for our Children after discussions with Aboriginal and Torres Strait Islander groups and communities. She knew that if she and the University of the Sunshine Coast were to secure a significant rollout of the Pēpi-Pod® Program in Queensland and, ultimately, the rest of the country, evidence of program effectiveness and respect for cultural heritage and practices of First Nations peoples would be essential.

The Queensland Pēpi-Pod® Research Study began in 2012 with a pilot group of five families, growing rapidly between 2013 and 2016, to 300 families. The study targeted families that health services providers identified as high priority – those with infants with two or more risk factors for SUDI, including smoke exposure, prematurity, low birth weight, parental substance and alcohol use, and multiple bed-sharers.

In July 2017, the study moved into an implementation phase, supported by additional funding, with the rollout to 600 families in Queensland areas identified with higher infant mortality. Study results demonstrated that the program was safe, acceptable to First Nations families, feasible to undertake in partnership with local services, and worked most effectively in services using continuity of care models with care providers who partnered with, and were trusted by, families in their communities. In particular, it demonstrated a reduction in the incidence of direct shared sleep with a smoker. By the middle of 2019, Young and her team had sufficient data to investigate if the program reduced all-cause post-neonatal infant mortality for babies aged 0–6 months.

Critical for the study was a comparison of data from all Pēpi-Pod® Program participants up to March 2019. Data on calendar year live births and infant deaths between 2010 and 2019 for the whole of Queensland were analysed, including the Aboriginal and Torres Strait Islander population and those in the most disadvantaged areas. A collaborative team, including Young and researchers from the Queensland Paediatric Quality Council, focused on changes in the state’s infant mortality rate, especially in the target populations after the more intense implementation of the Pēpi-Pod® Program between 2014 and 2018. The results were promising.

“The value of maternal and child health continuity of care within a network of supportive multidisciplinary health professionals during the first 2000 days should not be underestimated.”

The success of the program differed according to community participation. In the Queensland postcode areas where the Pēpi-Pod® Program achieved the highest level of community participation within the target population, there was a 75% reduction in infant mortality. Overall, the infant mortality rate among the Aboriginal and Torres Strait Islander populations fell by 46% after the program’s introduction. The impact was so significant that there was an overall 22% reduction in the infant mortality rate in the whole of Queensland after 2014. Before that, the decline had been gradual.

In addition to being trained healthcare professionals, Young and her team are researchers, and were able to equate those percentages to lives saved. They calculated that if they had not implemented the Pēpi-Pod® Program and Queensland’s infant mortality rate from 2013–2014 had continued unchecked to 2018, another 74 families would have experienced the tragedy of a sudden and unexpected death of their baby. Critically, there were no deaths associated with any vulnerable infants during Pēpi-Pod® Program participation.

The researchers’ patience and diligence have ensured an impact evaluation of the Pēpi-Pod® Program and demonstrated its effectiveness in reducing sudden expected infant deaths in the context of known risk factors. They have also shown it to be culturally appropriate, feasible, accessible, sustainable, and cost-effective. Whether it will be embraced on a larger scale is now up to the policymakers.

Where would you like to see the Pēpi-Pod® Program in the next five years?
We have proposed two phases to upscale the program across Queensland to all priority populations without delay to achieve the goal of embedding the Pēpi-Pod® Program into existing maternity and child health services which serve priority populations. First, an incremental design phase using a hub-and-spoke model to on-board four to five hospital and health services (HHS) per year (years 1–4) through existing maternity and postnatal care programs to maintain program fidelity. Phase 2 (years 5–8) will continue to build health-professional capacity in safe-sleep health promotion and to evaluate program process outcomes, sustainability, and mortality benefit.

What have been the most significant lessons learned in the program’s rollout?
The value of maternal and child health continuity of care within a network of supportive multidisciplinary health professionals during the first 2,000 days should not be underestimated. Trust takes time to develop and is essential to engaging meaningfully with families to create environments which consider and protect their baby’s airway. The Pēpi-Pod® Program was an important tool to promote infant sleep practices, keeping babies both close and safe from suffocation in shared-sleep circumstances, whilst being perceived as practical and culturally appropriate by families and health services.

The Pēpi-Pod® Program provides a low cost, high return on investment. The program has been estimated to save 15 babies each year at a cost of $1.4–2.1 million per year to operate, based on scaling the program from approximately 3,400 to 7,200 participant infants over eight years. The financial value Australian society place on saving 15 infant lives per year is $69.84 million per annum.

What have been the greatest challenges and how did you negotiate these?
Managing program fidelity during its rapid growth as communities shared the program principles across services was the greatest challenge. While Diffusion of Innovation theory was an underpinning principle, we worked closely with health services to ensure the three core elements were maintained so that the Pēpi-Pod® Program was understood to be more than just the portable sleep space.

Lack of long-term funding in the early research phase restricted our ability to track and measure the program’s impact on infant mortality. However, several First Nations health services we had engaged with valued, and continued to fund, the program after the research study. So in 2019 when we partnered with QPQC, we had enough data to examine impact on infant mortality. This support was integral to the results we have been able to achieve. 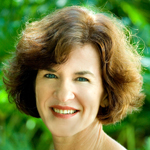 Professor Jeanine Young is a registered nurse, midwife, and neonatal nurse with over 30 years of experience in neonatal, paediatric, maternal, and child healthcare. Based at the School of Nursing, Midwifery and Paramedicine at the University of the Sunshine Coast, Queensland, Australia, Young researches how infant-care practices impact infant mortality – particularly breastfeeding, parent–infant bed-sharing, and shared-sleeping practices.

PrevPreviousSurgTimeTM: A leap forward in arthroscopy and telemedicine mentoring
NextThe absence of friendship in the COVID-19 pandemicNext 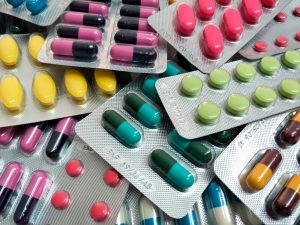 A new class of antibiotic drugs 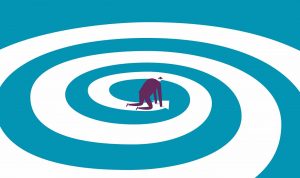 The complex web of addiction, disease and mental health