The universe has many mysteries to unfold. Neutrinos are generated in the core of our sun, during the nuclear reactions which produce the sun’s energy. Scientists need to combine different fields to make new discoveries regarding neutrinos, and Professor Hans J. Haubold, from the Outer Space division of the United Nations in Vienna, has made important contributions to this area of research. Data from neutrino experiments – known as Super Kamiokande, Homestake, and GALLEX (GNO) – can shed light on the relations between solar neutrinos, diffusion, entropy, and fractional calculus, as they appear in neutrino astrophysics.

Our sun is the source of life on Earth. It is a very complex stellar body and our window to the cosmos. Every second, millions of nuclear reactions occur at the heart of the sun, generating energy and elementary particles that arrive on Earth as solar wind, travelling with relativistic speeds (near the speed of light). One particle that is produced by the sun is the elusive neutrino. This is an elementary particle and a member of the lepton family. It is almost massless, without an electric charge, and it interacts rarely with other particles or atoms.

Billions of neutrinos pass through our bodies daily without having any noticeable effect. The neutrinos come in three states, each for every lepton (known as electron, muon, tau). By studying how neutrinos interact with matter, we can investigate unknown aspects of physics. To observe these rare neutrino-matter interactions, massive neutrino detectors were built to increase the probability of an interaction in the fiducial volume (the internal volume of the detector filled with various materials).

Three of these important neutrino experiments are the Super Kamiokande in Japan, the Gallex in Italy, and the Homestake in the USA. The analysis of the data taken from the neutrino experiments can help physicists discover new properties of solar neutrinos, and by comparing the experimental results with the theoretical expectations of standard models, scientists can glean important new insights into solar physics. The ‘standard model’ explains how the basic building blocks of matter interact, governed by the four fundamental forces (electromagnetic, weak and strong nuclear, and gravity). Prof Hans J. Haubold, from the Outer Space division of the United Nations in Vienna, along with his colleagues, has been making the theoretical calculations which can be compared with the results of experimental physicists. The neutrinos can help explain the creation of the universe and the broken symmetry between matter and anti-matter in the lepton region.

“Billions of neutrinos pass through our bodies daily without having any noticeable effect.”

The sun creates neutrinos as a by-product of nuclear fusion. Earth receives huge numbers of high-energy neutrinos, since the main process by which the sun maintains a hydrostatic equilibrium is through the fusion of two protons (known as PP chain). Among the first experiments to study solar neutrinos was the Homestake and SNO (Solar Neutrino Observatory), located in South Dakota, with the first results gathered in the late 1960s. Electron neutrinos were detected through the ‘inverse beta decay process’. The experiment is located about 1.5 km underground, where the tank with the tetrachloroethylene (a liquid chemical substance) sits. An atmospheric neutrino interacting with the chlorine (Cl) from the tetrachloroethylene creates Argon (Ar) and electron. The goal was to search for Argon atoms produced by the radioactive source 37Ar. The Super Kamiokande (Super-K) and GALLEX experiments followed, and sought to look at electron neutrino scattering from solar neutrinos. It was possible to measure simultaneously the electron neutrino and the total neutrino flux coming from the sun. 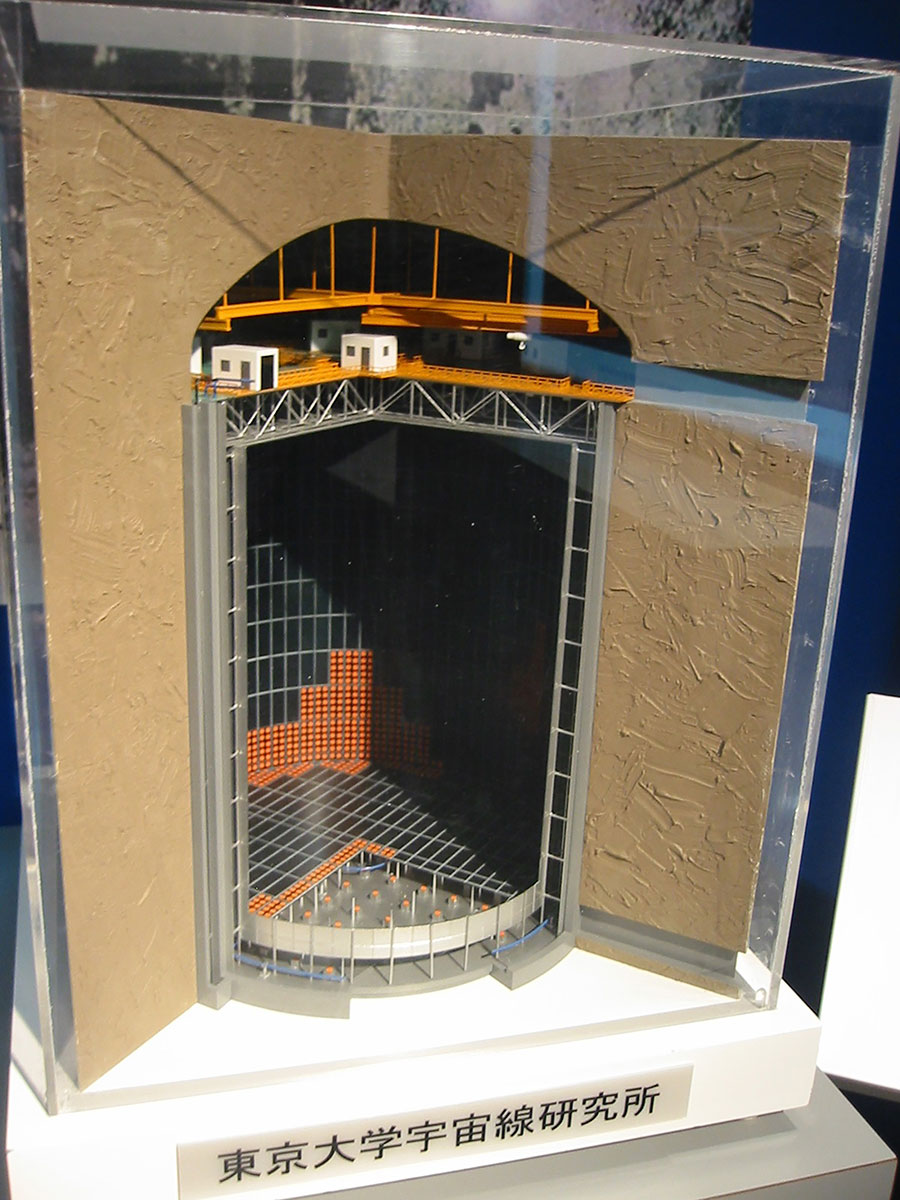 To explain the data collected, let’s first introduce the ‘neutrino oscillation’ theory. Knowing the distance to the sun, along with the energy of the incoming neutrino, it is possible to calculate the probability of an electron neutrino surviving. The neutrino experiments verified the neutrino deficit coming from the sun. Upon analysis of the data, it was found that the standard model predictions were higher than the neutrino flux measured by the detector. The neutrinos change state while travelling in a vacuum, and therefore the predictions did not coincide with the measurements if this property was not factored into the calculations. Although the question – how neutrinos interact with matter – was not fully answered, the neutrino oscillation theory provided a good explanation and was therefore verified with the solar neutrinos.

The Super Kamiokande, GALLEX(GNO) and the Homestake experiments

The Super-K is an upgraded version of the Kamiokande experiment, and the design allowed for the study of atmospheric and solar neutrinos. The Super-K is located 295 km southeast of the Japan Proton Accelerator Research Complex (J-PARC) within an old mine, inside the Ike Mountain, and is the primary detector used in the experiment T2K (Tokai to Kamioka). The experiment involves a large cylindrical tank, 41.4 meters in height and 39.3 meters in diameter. It is called a water Cerenkov detector, which holds 50kt of water and is the largest in the world. The detector was built to search for proton decays.

The most energetic solar neutrinos can recoil an electron with enough energy to produce Cherenkov light. When a particle enters a medium with the speed of light in this medium, it emits ultraviolet electromagnetic radiation – this is called Cherenkov light, named after the scientist who discovered it. By using the data from the detector, it is possible to reconstruct the energy and the direction of the event relative to the position of the sun in the sky at that instance.

The Homestake experiment took place in a gold mine in South Dakota, where a tank of 380 cubic meters containing perchloroethylene was placed. To prevent interference from cosmic rays, the target had to be placed deep underground, at approximately 1500 meters. The Chlorine isotope 37 (37Cl) transforms into a radioactive isotope of Argon (37Ar) when it interacts with an electron neutrino, which can then be extracted and counted.

The GALLEX experiment is a Gallium (Ga) detector (100 tons) and is designed to find solar neutrinos from PP fusion, which is 90% of the total neutrino number according to the predictions of the standard model. The 71Ga interacts with an electron neutrino and generates an electron and a Germanium isotope (71Ge), which can be detected through this experiment.

Thermodynamics can answer many questions about reality, and the second law of thermodynamics relates entropy to probability. The entropy quantifies chaos and makes it a measurable quantity. The entropy of the universe “tends to a maximum” and this quantity links equilibrium and non-equilibrium (time-dependent) properties of physical systems. This is called Boltzmann’s principle.

“A tiny particle, almost massless, guides scientists to a world of huge energy scales and physics beyond the standard model.”

In nature we frequently observe distributions that are described by exponential quantities like the solar neutrino flux, and Prof Haubold’s collaborator, Prof Tsallis, developed the statistical tools needed to incorporate them in thermodynamics. The solar neutrino experiments have reported periodic variation in the fluxes, through a process of standard deviation analysis. If the periodicities of the fluxes are confirmed, they could lead to the discovery of new solar, nuclear, or neutrino physics. This is considered as the ultimate answer to the solar neutrino question. The analysis of the data should be complemented with the diffusion entropy analysis (DEA). The DEA measures the weight of the probability density function (PDF) of the diffusion process, which is generated by the physical source of fluctuations, time series. The results of the data analysis from the solar neutrinos show an unknown phenomenon linked to the non-equilibrium signature in the core of our sun. The related question of whether the sun has a hidden chronometer, first raised by of Robert H. Dicke, remains unanswered.

The solar neutrino problem was partially solved with the theory of neutrino oscillations, and recently was expanded with the idea of neutrino entanglement, which is a mix of all the three flavours into one single particle state. Over the last 50 years, many solar neutrinos experiments, such as Homestake, Gallex, and Super-K, have been trying to investigate the properties of this particle, and to answer the question of the broken symmetry between matter and anti-matter in the universe. We have evidence of a strong neutrino flux deficit, which suggests the presence of neutrino oscillations.

After performing diffusion energy analysis, with advanced mathematics using Boltzmann’s entropy and standard deviation analysis, the data from the Super-K has revealed a non-Gaussian distribution with a harmonic behaviour (symmetric oscillations), and researchers expect to obtain important information through future experiments.

There is still a debate in the scientific community about the explanation of the strange experimental results, and there is no agreement among scientists as to which mathematical and physical conditions satisfy the probabilistic interpretation of the unified fractional quantum reaction-diffusion equations. A tiny particle, almost massless, guides scientists to a world of huge energy scales and physics beyond the standard model.

What is the next mystery to unfold?


Although solar neutrino experiments have resolved the long-standing puzzle of the missing neutrinos (the solar neutrino problem) by neutrino oscillations, there are still several open issues concerning better understanding of oscillation parameters or on the search for new physics. Astronomy, physics, and mathematics/statistics remain exciting fields of education, teaching, and research. 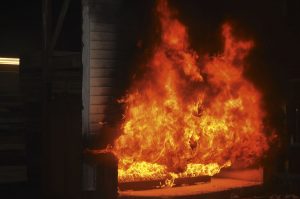 How new technology is stopping fire in its tracks