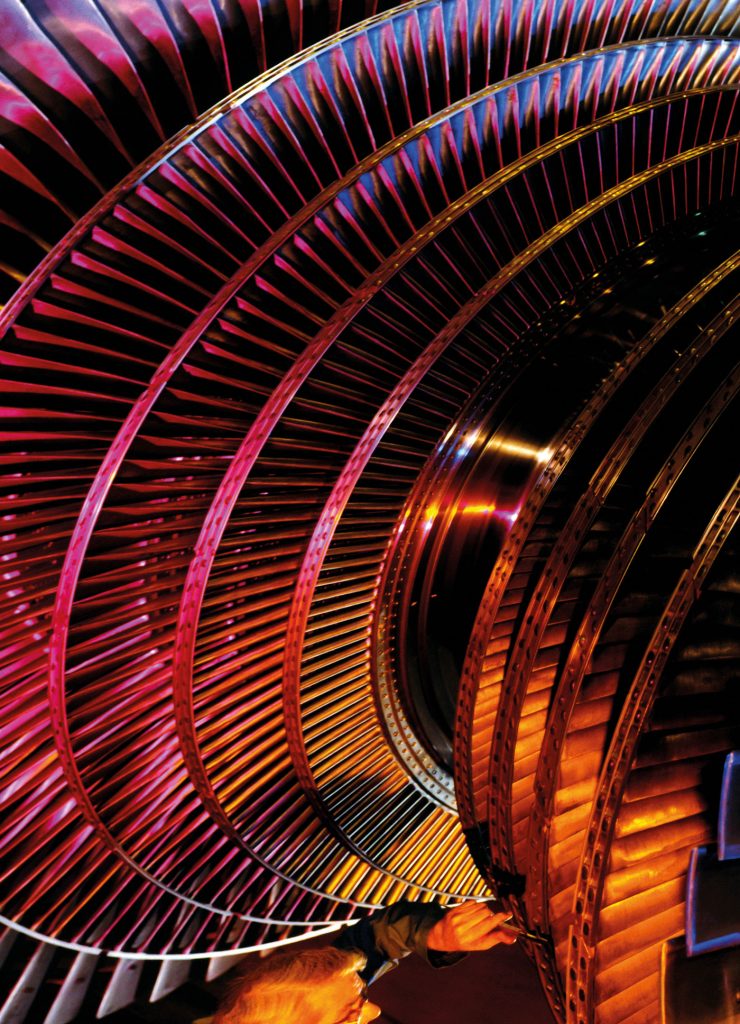 ArticleQ&ADetailDownload PDF
The use of low-temperature heat may offer an interesting alternative to the use of fossil fuels: it can be upgraded for heating purposes or transformed through thermodynamic cycles into useful forms of energy. The team of Dr Jürg Schiffmann, the Laboratory for Applied Mechanical Design at École Polytechnique Fédérale de Lausanne, is exploring the development and application of small-scale and oil-free turbomachinery supported on gas lubricated bearings for decentralised energy conversion.
With increasing severe weather around the globe, minimising climatic temperature rise is critical and reducing worldwide energy consumption and CO2 emissions is a key step in this process. Realistic models suggest that 50% of the required cuts could come from increased energy conversion efficiency. Small-scale turbomachinery has been identified as a potential key technology in improving the efficiency and environmental impact of energy-conversion systems.
Energy conversion is the process through which energy changes from one of its forms to another. Think about how a car engine converts chemical energy (the fuel) to mechanical energy (e.g. the pistons). Energy conversion processes can be exploited to provide heating, refrigeration, or to recover mechanical work from heat in domestic and industrial appliances and transportation. Such processes often involve either the compression or the expansion of a fluid. Turbines (which extract energy from a fluid and convert it into mechanical work) and compressors (which increase the pressure of a gas by reducing its volume) are examples of energy conversion machines. This compression and expansion process can be performed either through volumetric machines, which operate on the principle of a working chamber that changes its volume (like a piston) or through dynamic machine devices capable of transferring energy between a rotor and a fluid. The latter are collectively known as turbomachinery.
Normally, in small-scale energy-conversion applications, like those used in domestic or commercial settings, positive displacement machines are used to compress and/or expand a gas (piston and scroll compressors). These machines can be bulky and operate at relatively low efficiency (~65%). Furthermore, they require oil for sealing and lubrication. The oil generally moves over time and progressively decreases the efficiency of heat exchangers.
Small-scale turbomachinery
Over the last decade, considerable effort has been devoted to scaling down turbomachinery equipment, which traditionally has been used mainly for large scale (industrial) applications, in order to replace these positive displacement machines. Smaller scale turbo-compressors in domestic scale heat pumps can reach equivalent or even higher efficiencies than the volumetric compressors currently in use and are approximately one order of magnitude more compact. They also offer the additional advantage of oil-free operation, which simplifies the design, lowers noise emissions and reduces maintenance requirements. 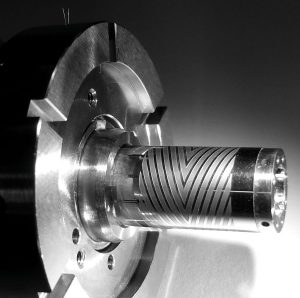 Small-scale turbomachinery is potentially well suited for applications in several technological fields. As such, a small-scale turbo-compressor could make up the fundamental mechanical component of heat pumps, which operate by transferring heat from a source to a destination (“heat sink”) in the opposite direction of spontaneous heat transfer, i.e. by absorbing heat from a cold space and releasing it to a warmer one. Familiar examples of heat pumps include air conditioners and freezers. According to the International Energy Agency, the residential sector consumes 30% of the planetary energy consumption, a large part of which is used for ambient and water heating: increased efficiency in this area could have a substantial impact on emissions and energy consumption levels. Compared to heat pumps driven by volumetric machines, a turbo-compressor could improve the efficiency of heat pumps by up to 30%. 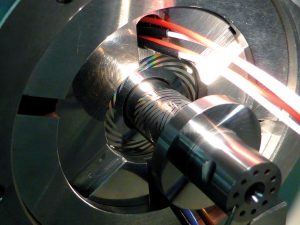 In addition to the domestic applications, small-scale turbomachinery can also be used in air conditioners for transportation, waste heat recovery of internal combustion engines through Organic Rankine Cycles, air compressors for fuel cells for stationary applications and transportation, hot gas recirculators for Solid Oxide Fuel Cells and solar thermal applications.
Designing high-performance small-scale devices
The work led by Dr Schiffmann at the Laboratory for Applied Mechanical Design (LAMD) of the École Polytechnique Fédérale de Lausanne is focussed on the design and application of small-scale turbomachinery for energy conversion, from compressors for domestic heat pumps to high-speed expanders for waste heat recovery in cars and trucks. But it is not a straightforward process to ‘miniaturise’ an existing technology. The main challenges faced in the development of small-scale turbomachinery with an extended lifetime are related to their minute size and their high rotor speed, which can exceed 200,000 rpm. At impeller tip diameters below 20mm, manufacturing and assembly becomes more complicated and the aerodynamics themselves are challenging. The high rotor speed requires the use of dynamic gas-lubricated bearings that generate their load capacity through the rotation of the shaft in order to extend the lifetime of the rotor.

To address these problems, Dr Schiffmann and his laboratory are carrying out pioneering work focussed on herringbone grooved journal bearings and foil bearings. Currently, the main limitation in the use of these bearings is the tight clearance required for stable operation, which is expensive to manufacture. Dr Schiffmann’s work is directed toward increasing the bearing clearance and relaxing the manufacturing tolerances, whilst maintaining rotordynamic stability in order to reduce both mechanical losses and their cost. Further research is directed towards the understanding of the effects of real gas lubrication on the rotordynamic bearings properties and on the underlying mechanisms governing the operation of foil bearings.


A further challenge in the development of new turbomachinery arises from the fact that, at small scales, the interactions between the different mechanical components of a device (e.g., turbomachinery, bearings, rotor dynamics and motor) become significant. This might take, for example, the form of a large specific heat flux from hot to cold sections. As a consequence, these systems require new design and optimisation approaches, which truly integrate all of these areas. The approach used at LAMD involves the implementation of reduced order models that simulate all the mutual interactions between the elements of a device. This mathematical structure is then linked to evolutionary optimisation algorithms, which allow the team to optimise the devices towards conflicting objectives such as efficiency, cost and rotordynamic robustness.
This integrated approach has led to the development of a number of new small-scale turbomachinery prototypes including a single-stage refrigeration compressor for domestic heat pumps with a diameter of 20mm running at 210,000 rpm with a power of 2 kW, achieving pressure ratios in excess of 3.3 and efficiencies above 75%; an astonishing twin-stage compressor for domestic heat pumps running at 180,000 rpm with a power of 6 kW, achieving pressure ratios sufficiently high to deliver hot tap water at 65°C using ambient air at -12°C as a cold source; and a thermally driven heat pump in which an Organic Rankine Cycle (ORC) turbine drives the compressor of a heat pump, where heat at 150°C is delivered to drive the ORC.

These prototypes highlight the potential for huge savings in energy consumption that could come from an increased energy conversion efficiency. The development of new small-scale turbomachinery and the practical application of concepts emerging in this field, for example, from the theoretical analysis of the link between a mechanical component’s size and shape and its efficiency in energy conversion and energy transport machines, is an important step forward toward a more sustainable and efficient exploitation of existing energy resources, especially in domestic settings and in transportation. The work carried out at LAMD is exploring some of the most promising and far-reaching directions for the practical exploitation of small-scale turbomachinery and for the design of future small-scale devices. This research provides an important contribution to the development of techniques and protocols for the reduction of energy consumption and CO2 emissions on a planetary scale, using integrated device design and optimisation approaches. Collaborations with universities and industrial partners constitute an important part of the laboratory’s activities, and they promote an effective transfer of knowledge with industry and an active engagement of students in cutting-edge engineering research.

What are the most important applications of small-scale turbomachinery?
The most important applications are the ones where these little systems can deploy their full potential both in terms of efficiency gain and numbers. This would be the case for heat pumps, Organic Rankine Cycles and probably fuel cells.
What are the main challenges in the development of small-scale turbomachinery for, say, energy conversion or energy recovery in transportation?
Impellers with tip diameters in the range of 20mm need to rotate at speeds in excess of 200krpm. At the same time, they need to achieve reasonable life time, which excludes the use of classical rolling element bearings. Gas lubricated bearings are used instead. A key challenge is the tight clearance required to run them stable.
How are new smaller-scale devices helping to decrease the environmental impact of domestic heating and transportation?
Compared to positive displacement, machines turbomachinery can achieve higher efficiencies while offering a more compact (higher power density) and an oil-free solution.
How do you see the field of small-scale turbomachinery engineering evolving in the coming years?
Since a large share of our projects is being financed by industrial partners, we expect to see small-scale turbomachinery starting to appear on the market and deploying their potential very soon. 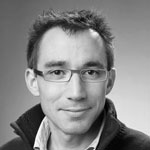 After obtaining his diploma in mechanical engineering from EPFL in 1999 Dr Schiffmann co-founded a start-up company dedicated to the design of gas-lubricated bearings. In 2005 he joined Fischer Engineering Solutions where he led the development of small scale, high-speed turbomachinery. In parallel he worked on his PhD which he obtained from EPFL in 2008. He then joined the Gas Turbine Lab at MIT as a postdoctoral associate where he worked on foil bearings. In 2013 he was nominated assistant professor at the Ecole Polytechnique Fédérale de Lausanne.
Contact
Dr Jürg Schiffmann
Ecole Polytechnique Fédérale de Lausanne
Laboratory for Applied Mechanical Design
EPFL STI IGM LAMD
Rue de la Maladière 71b
CH-2002 Neuchâtel
Switzerland
E: jurg.schiffmann@epfl.ch
T: +41 21 695 45 13
W: https://lamd.epfl.ch/

PrevPreviousMay I have your attention please?
NextAgricultural toxins and the risk of Parkinson’s disease – could genetics be the key?Next 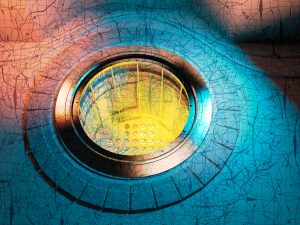 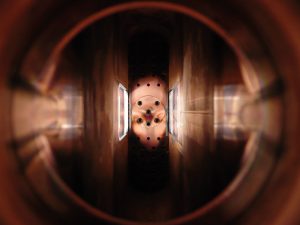 Interaction of acoustics and combustion in rocket engines 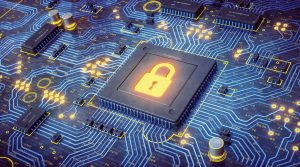