Palm oil is the world’s most used vegetable oil. Its production increases the GDP of developing nations and improves the livelihoods of farmers. However, palm oil production has wrought substantial environmental harm to the regions, which grow it through deforestation and biodiversity loss. This leads Dr Ingrid Fromm at Bern University of Applied Sciences to the question: is it possible to produce palm oil sustainably? She is examining the sustainability of palm oil production in Honduras through the analytical framework of assemblage theory.

Palm oil is the world’s most-produced vegetable oil. It can be used as a food and cosmetics additive, or to produce biofuel. The prevalence in the production and use of palm oil results from it being the most efficient of all oil-producing crops, requiring significantly less land than others, such as soy or rapeseed. Its popularity has made it an integral part of emerging economies’ GDP, most notably in South East Asia and Latin America, where farmers with small-scale farms depend on producing palm oil for their livelihoods.

However, the economic benefits associated with palm oil production are connected to substantial adverse environmental impacts. Because palm grows in tropical areas, undisturbed forested lands are cleared to grow crops. These regions of pristine tropical forest are typically areas of ecological importance with high levels of biodiversity and carbon sequestration capacity. Furthermore, regular social conflicts over land ownership and land stewardship have arisen from the increased exploitation of land for palm oil production.

From a Honduran perspective, palm oil production accounts for a substantial amount of the country’s international exports and supports numerous small-scale farmers. However, government policies for expanding palm oil production have mostly focused on the economic benefits while overlooking sustainability issues.

To better understand the implications of Honduras’s palm oil expansion policies on the economy, environment and society, Dr Ingrid Fromm at Bern University of Applied Sciences evaluates the sustainability of palm oil production in Honduras by using assemblage theory as an analytical framework.

Production of palm oil in Honduras has become an essential part of the economy. It contributes $400 million to the Honduran economy, making it one of the country’s primary exports. Palm oil has been grown in Honduras for almost 100 years and saw steady growth as a commercial crop until 2000. Since 2000, coinciding with the turndown in banana exports, there has been a fivefold increase in land use for palm oil production.

This considerable increase in the last two decades has been a direct result of economic policies from the Honduran government to incentivise palm oil production. The policies targeted subsidies, tax breaks and funds for small-scale farmers to encourage the increased exploitation of land for palm oil production.

Despite the clear economic benefits of increasing palm oil production through increased exports and use as biofuels, the expansion of palm oil plantations causes substantial environmental degradation through deforestation, habitat loss and fragmentation, and biodiversity loss. Moreover, social problems around land rights have persisted for decades.

Assemblage refers to the coming together of people and things. Assemblage theory is fundamentally the idea that society is not a fixed or stable reality. Instead, it is an incredibly complicated patchwork of connections of people and things, and each relationship plays a part in the other. Assemblage theory refers to the complexities in society over multiple dimensions such as power, time, space, people, companies, legislation etc. and how they influence each other.

“The influence and actions of the actors within the assemblage shows how economically, socially, and environmentally sustainable palm oil
in Honduras is.”

In the context of Dr Fromm’s research, assemblage theory was used to analyse the configuration of the palm oil industry in Honduras, how unrelated elements (discussion, legislation, land etc.) within the industry are held together and finally, how power dynamics (the ability to govern aspects in an assemblage in one’s self-interest) affect the industry’s mechanics and sustainability. Dr Fromm determined the effect of policy measures, which increased palm oil production, on the Honduran economy, society, and environment, therefore discovering if sustainability was possible.

Honduras suffers from similar problems as other palm oil-producing nations in trying to develop legislation and regulation that maintains profitability among the palm oil industry assemblage but is socially and environmentally sustainable at the same time. One unique aspect of Honduran palm oil production is the disassembly of the systems, land and structures in place for the banana agro-business, which was reassembled for the palm oil industry – resulting in less deforestation of virgin forest as palm oil farms replaced banana plantations. Furthermore, most Honduran firms and small-scale farmers comply with the Roundtable for Sustainable Palm Oil standard for sustainable palm oil production, which has resulted in evident benefits for workers’ health and safety as well as less deforestation and environmental degradation. However, as these ecological standards increased, it was detrimental to social cohesion, with conflicts of interest arising between the different actors in the assemblage.

The Honduran government has a lot of power in the assemblage as they created the legislation. The legislation does support small-scale farmers through subsidies and tax breaks; however, because of a lack of judicial support, tensions between the actors did arise. The government also lacked the stability or experience to manage the relationships in the assemblage, which allowed other actors to influence the power differential and give them more authority. Multinational corporations had most of the power and dictated the relationships within the assemblage.

For the most part, the extractors were positive actors within the assemblage and reinvested their profits into the community with education, vocational training, and health infrastructure. In contrast, the multinational corporations and some farming cooperatives were exploitative in how they purchased land from the state or small-scale farmers. The government created a flawed and contradictory set of policies which created social unrest within the assemblage through failures in maintaining land rights. This affected the discourse within the assemblage and meant that the small-scale farmers had diminished power, thus making the palm oil industry in Honduras socially unsustainable.

In contrast to other countries, the palm oil industry in Honduras has had less environmental impacts as it replaced cultivated instead of forest area. What’s more, most of the assemblage is complying with international environmental standards. There have been clear economic gains for the country, which trickled down to some small-scale farmers and created jobs in deprived areas. However, the power structure of the assemblage within the palm oil industry in Honduras is not currently socially sustainable.

This critical research from Dr Ingrid Fromm of Bern University of Applied Sciences has shown through the novel analytical framework of assemblage theory that palm oil production in Honduras still has a long way to go to achieve sustainability. This analytical framework could assist policymakers in determining which policies and legislations should be set in place to support industries which are more inclusive and promote sustainability from an economic, social and environmental perspective. It could also inspire other palm oil-producing regions to look at where sustainability issues can occur within their assemblage and give them the ability to rectify those issues. The research could lead to further studies of how to make better social structures between stakeholders to improve the sustainability of palm oil production in Honduras and globally.

What inspired you to conduct this research?


I grew up in Honduras, in a small town on the northern coast completely devoted to banana production. Over the last decades, I’ve been observing how these areas where banana was produced have been replaced by the oil palm. The social structures have changed dramatically over this period of time and it seems to me that not all of the labour force once employed in banana production transferred to this industry. One motivation to conduct this research was to understand this dynamic. As more and more people abandon the agricultural sector, it’s important to understand which factors push people out of agriculture, or drive them to migrate, as is the case of Honduras. In most value chain research I have conducted, it’s crucial to observe economic, social and environmental issues and not only the economic drivers in isolation.

Are there any viable alternatives to palm oil that do not have the same level of negative repercussions?

I think that the industry hasn’t had only negative repercussions. It’s an industry which has been beneficial for many people, by providing employment or economic opportunities for small-scale farmers. Currently, the larger companies are actively working with producers in numerous social programs or farmer trainings and there is a sense that more can be done by working together with different actors of the assemblage. The point we did make in the paper was that in order to go forward, the lessons from the past failures in terms of policies which only sought economic gains should be learnt, so industries like this one can be economically, socially and environmentally sustainable.

Dr Fromm’s research focuses on the value chain of multi-country trade commodities such as coffee, cocoa, banana and palm oil.

Dr Ingrid Fromm is a research associate and lecturer in international agriculture at the Bern University of Applied Sciences, School of Agricultural, Forest and Food Sciences, in Zollikofen Switzerland where she teaches in the Bachelor and Master’s programs. Her work focuses on global value chains and their impact on economic, environmental, and social development. For the past 17 years, Dr Fromm has focused on value chain research in multi-country trade commodities such as coffee, cocoa, banana and palm oil as well as fresh vegetables and pulses. She has conducted research and consultancies in numerous developing countries in Latin America, West Africa, and Asia.

Precipitation changes in a warming climate

A new theory for Secchi depths 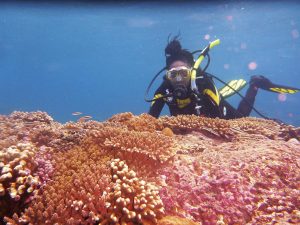 Diverse perspectives in the aquatic sciences