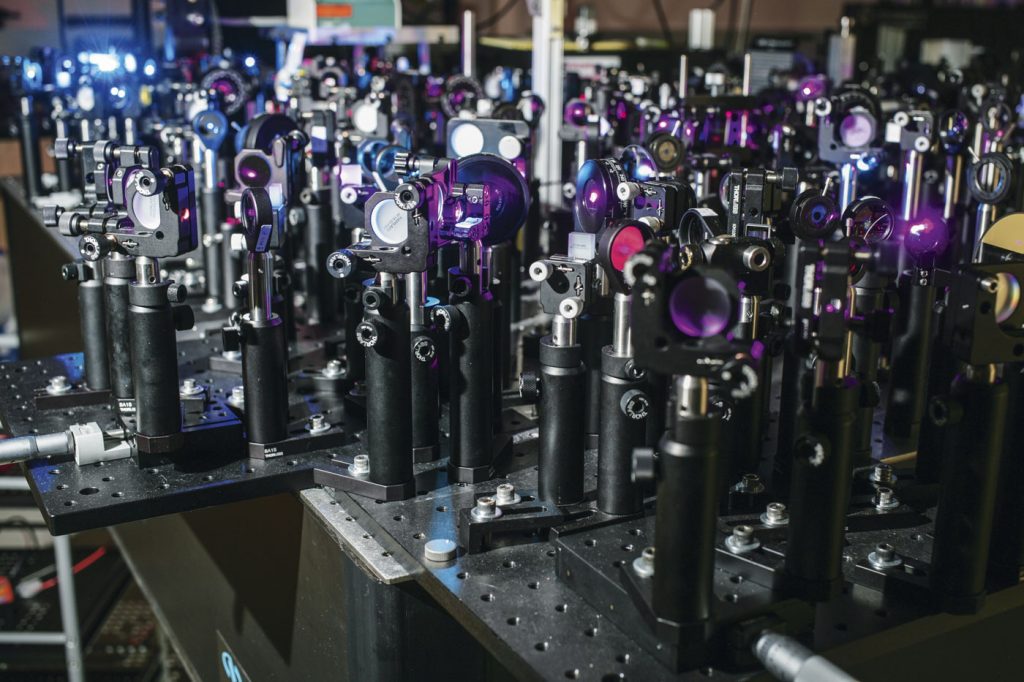 ArticleQ&ADetailDownload pdf
Dr Chong Fang is an Associate Professor of Chemistry at Oregon State University. He leads a team of researchers in developing ultrafast Raman spectroscopy methods to allow the capture of real-time molecular movies. The ability to follow a process (biological or chemical) step-by-step offers huge potential in both understanding and control. Ultrafast Raman spectroscopy is an emerging structural dynamics technique which offers just that, and is contributing to significant progress in developing both biomolecular sensors and novel functional materials.
Raman spectroscopy exploits the inherent motions or vibrations of molecules and allows a structural snapshot to be gained; the output can be interpreted to display a molecular fingerprint. The work of Dr Fang and his group focuses on ultrafast Raman spectroscopy with femtosecond resolution (one billionth of a millionth of a second), accessing normally hidden molecular snapshots on the time scale of molecular vibrations. As such, if a molecule is undergoing some sort of transition, then it is possible to capture the pertaining atomic choreography along the transition and when combined, give a riveting molecular movie that may reveal mechanistic information.

Dr Fang and his group focus on ultrafast Raman spectroscopy, capturing molecular snapshots on the time scale of molecular vibrations

Research in fundamentals drives impact in applied world
Femtosecond stimulated Raman spectroscopy (FSRS) technology can have significant implications within a number of fields. The work carried out by Dr Fang and his group is heavily driven by the need to do relevant engaging research which not only investigates the fundamentals, but can be applied across disciplines. A key interest is the structure–function relationships, which contribute to the understanding and tuning of biological processes and novel functional materials. In particular, this is within the area of photochemistry where reactions are pivotal in energy transfer processes on ultrafast time scales. Not only are the photochemical reactions of importance to Dr Fang and his co-workers, but he is also especially interested in the development of the FSRS technique through these studies.
Investigating photochemical reactions in action
Dr Fang and co-workers have conducted several cutting-edge studies on photosensitive molecules that exhibit previously unknown structural dynamics on ultrafast time scales.
Ultrafast photoacid dynamics
The photoacid (molecules which become more acidic on exposure to light) pyranine was selected for study by Dr Fang and co-workers to undergo functional motions on femto- and pico-second (one millionth of a millionth) time scales following the actinic photoexcitation. These structural dynamics include excited state proton transfer (the hydrogen atom charge exchange between partners) and vibrational cooling (off-loading excess excitation energy into surroundings). Typically, such processes are followed using time-resolved Stokes (the sample scatters light at a lower energy than the incident laser) Raman spectroscopy to observe the excited-state dynamics. Dr Fang and co-workers, however, looked at processes that trialled a combined Stokes and anti-Stokes (the sample scatters light at a higher energy than the incident laser) measurement approach. This offered the potential to access a greater depth of information about excited-state relaxation mechanisms by detailed comparison between multiple Raman modes.
The integral spectroscopic approach was made possible by using a Raman probe which covered a broader spectral range. This probe can be readily tuned to the dynamic region of interest, enhancing signals from the transient species. From this newly improved experimental set up, Dr Fang and co-workers uncovered the intrinsic conformational dynamics during the photochemical reaction and identified a two-phase (fast and slow) energy dissipation pathway.
Fluorescent protein biosensors for calcium imaging
Using the ultrafast Raman technique, Dr Fang and co-workers have unravelled the excited state conformational dynamics of fluorescent protein (FP) Ca2+ biosensors. FPs were first identified in jellyfish, and comprise a chromophore (a group responsible for colour) stimulated by light and embedded in a protein pocket. Combining FPs with biosensors (molecular devices containing a biological and physiochemical component) in a single device opens up the potential to exploit the fluorescent property in bioimaging for the study of particular biological processes, such as neuron firing (sending out brain messages) and metastasis (spread of malignant cancer cells). Unravelling the photoinduced structural dynamics of the FP-based Ca2+ biosensors can guide their rational design for better biosensing technology which, until recently, has been achieved via time-consuming trial-and-error methods.

The cross-discipline nature of Dr Fang’s work means that the insights revealed through his team’s research have enhanced scientific understanding, and determined the potential for technological developments

Dr Fang and co-workers studied several emergent GFP-calmodulin-chimeric calcium biosensors using time-resolved FSRS. As in the studies of the photoacid, tunable Raman pump and probe pulses were employed to enhance the signals from the short-lived excited state species. In both cases, the structure–function role of the protein calcium biosensor was revealed, including how the calcium ions allosterically modify the FP chromophore pocket environment and affect the excited state proton transfer (ESPT) via characteristic vibrational motions to reach the green fluorescent state. Structural rearrangements around key residues, affecting the hydrophobicity of the chromophore and hydrogen bonding networks, also inhibit ESPT reaction in the presence of calcium ions.
A platform to elucidate aqueous Aluminium chemistry in real time
Work by Dr Fang and co-workers has also helped to address the gap in knowledge of aqueous aluminium (Al) chemistry – hugely important in the modern world and especially in industries such as electronics and soil chemistry. Dr Fang’s team and collaborators have developed a powerful platform capable of overcoming the challenges faced in the selective synthesis and in situ characterisation of flat Al13 clusters – environmentally “green” precursors (component building blocks) of electronic thin films such as sapphire. They employed ground-state FSRS and developed the technology using a Raman probe pulse that could measure a wider range of Raman signals including the low-frequency modes, generated by a unique optical approach of crossing two femtosecond laser pulses onto a thin transparent medium, exposing the spectral region to observe signals from the nascent Al nanoclusters.
Using the modified FSRS technique to target the formation of the flat Al13 cluster as a function of acidic pH values (potential of hydrogen in solution), the group identified an efficient and successful synthesis route (via an electrochemical method). Combining computational results with spectral data from the experiment, the FSRS technique further allowed the multi-staged reaction species, including an Al7 intermediate and the final Al13 cluster, to be determined and their evolution over the reaction to be followed. This established a three-step pathway from the starting components to the Al13 target cluster in water, the omnipresent solvent.
This collage of snapshots into the work of Dr Fang presents femtosecond stimulated Raman spectroscopy as a powerful technique for tracking photochemical reactions in solution – it has not only been shown to be versatile, but it can be applied to a diverse range of problems as well. The cross-discipline nature of Dr Fang’s work means that the insights revealed through his team’s research have both enhanced scientific understanding, and also determined the potential for technological developments from the bottom up across a number of important fields with social benefits.

What was the catalyst to you advancing ultrafast Raman spectroscopy for molecular movies?
Understanding the structure–function relationships and how chemical reactions occur in real time has been the “holy grail” for scientists and engineers. Trained as a physical chemist, I was fortunate to study under two renowned molecular spectroscopists, the late Prof Robin Hochstrasser at UPenn and Prof Richard Mathies at UC Berkeley. My PhD thesis focused on the structures and dynamics of alpha-helices and drug–enzyme complexes in water and membrane environment at thermal equilibrium, and it was an interesting transition for me to move across the country and investigate the photochemistry of green fluorescent protein! Once I discovered the power of ultrafast Raman and the intriguing spectral data like a Picasso painting, I was drawn to the intricate and compelling molecular “movies” that we capture from solution precursors of high-quality thin films to protein biosensors which can track calcium ion movement in living systems.
Who do you hope will benefit from this ultrafast FSRS technology?
The main beneficiaries of the FSRS technology are scientists, researchers, engineers, and developers in physical chemistry, chemical engineering, materials science, energy sectors, and biomedical fields. We envision that a fundamental mechanistic understanding of chemical reactivity and reaction pathways can truly provide targeted rational design principles to improve the functionality and usefulness of a wide range of molecular “machines”. We have started a number of exciting collaborations with chemists, materials scientists, protein engineers, and optics experts across the world to accelerate the discovery pace and research impact.
Why is it important to you to study both scientific fundamentals as well as their applications in the wider world?
One thing that excites me the most about working at a public university is that I can teach a large number of students, do research, outreach, have an impact on people surrounding me, and vice versa. It is important to remain relevant as a scientist in this modern age not just for the need to support a research lab, but also for your own inner passion and drive. Curiosity is second nature to human beings and the pursuit of new knowledge is satisfying in its own merit. However, a visible impact on the current applications of those functional molecular systems under FSRS investigations should elevate our research to a new height and keep every team member highly engaged.
In your experiments, you follow a reaction as it happens, on ultrafast time scales. What challenges does this kind of experimental set-up pose?
I consider myself lucky to be able to develop a powerful structural dynamics toolset at OSU Chemistry and shed light on many exciting yet underexplored reactions. Using the molecular movie analogy, we are not directing the atoms to move, instead we gently excite and push them in a coherent way then watch the ensuing actions and consequences. The main challenges arise from achieving the balance between force and location for the push, and the resolving power of our “camera” capturing those fine details of the excited molecules. One effective strategy has been the wavelength tunability of our sequence of laser pulses that can be individually and precisely controlled.
Where do you plan to take this ultrafast FSRS technology next?
Our journey into the intriguing world of photochemistry has just started. We have been fortunate to catch a glimpse of the multidimensional reaction coordinate of materials transformations and biosensor responses, but there is so much more to learn about these molecular systems. Building on the knowledge and expertise we have gained over the years, we are poised to further develop the FSRS technology to be more versatile and user-friendly with field-proven operating procedures, tips and tricks, and higher resolving power with less sample concentration and reduced laser powers. Our future interests include the engineered protein biosensors with genetic code expansion, super-photoacids, and molecular motors that modulate their emission properties under light irradiation.

Bio
Dr Fang graduated from University of Science and Technology of China (USTC) with a dual BS in Chemical Physics and Applied Computer Sciences. He received a PhD in Physical Chemistry at the University of Pennsylvania before starting a postdoctoral fellowship at the University of California, Berkeley. He is currently an Associate Professor of Chemistry at Oregon State University.
Contact
Dr Chong Fang
Associate Professor
Department of Chemistry
Oregon State University
Corvallis, OR 97331
USA
T: +1 541 737 6704
E: Chong.Fang@oregonstate.edu
W: http://oregonstate.edu/colleges/chem/fang/