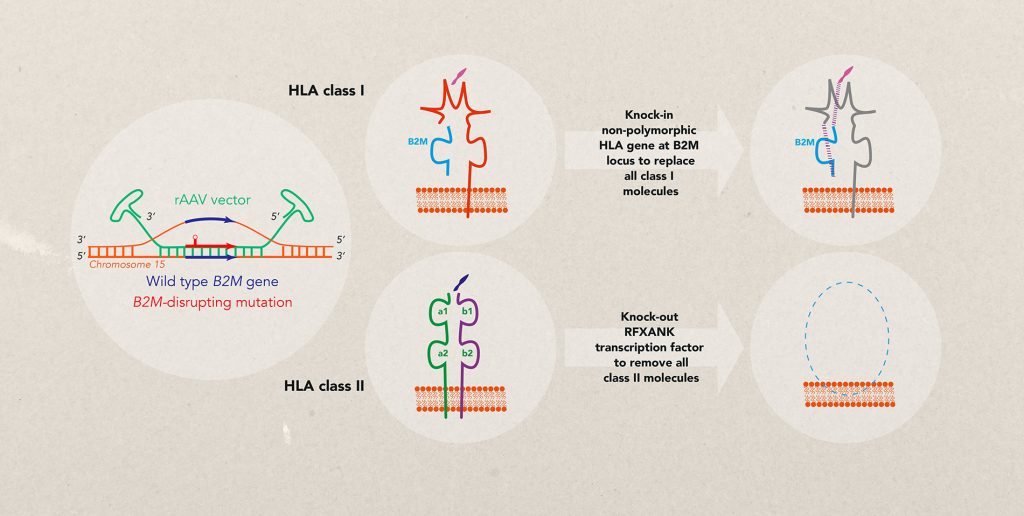 ArticleQ&ADetailDownload pdf
Dr Claudia Mitchell (CEO of Universal Cells) and her team are focused on the commercialisation of an innovative gene-editing technology to develop universal donor stem cells that are not subject to immune system rejection.

Pluripotent stem cells offer huge therapeutic potential. These undifferentiated cells can give rise to almost any specialised cell type, acting as a natural repair system for damaged tissues or as novel therapeutics that can be further engineered to treat diseases.

Scientists have exploited the unique properties of stem cells to treat diseases associated with dying or damaged cells. Currently, in Europe, 26,000 patients per year receive stem cell therapy to treat blood disorders and some cancers, including leukaemia. However, currently human donors are the main source of stem cells, limiting the treatment’s success due to rejection by the patient’s immune system.

In order to achieve the full therapeutic potential of pluripotent stem cells, the issue of rejection must be solved: Universal Cells Inc. aims to achieve this goal. Founded by Dr Claudia Mitchell and Dr David Russell in 2013, the company focuses on the use of a pioneering gene-editing technology to develop Universal Donor Cells (UDCs) – modified pluripotent stem cells that are refractory to rejection by a patients’ immune system.

HLA molecules are closely monitored by the immune system. Differences in either HLA class I or HLA class II proteins lead to the identification and rapid destruction by cytotoxic T-cells (cells that ‘kill’ other cells). The immune system is also ready to detect and destroy cells that completely lack HLA class I molecules, using a type of immune cell called a Natural Killer (NK) cell. Thus, simply removing HLA molecules will not suffice to create a Universal Donor Cell.

What Prevents UDCs From Being Rejected?
UDCs have been genetically modified so they do not express any hypervariable HLA class I or HLA class II molecules. Cytotoxic T-cells are thus unable to recognise UDCs as ‘foreign’. Additionally, to avoid rejection by NK cells, UDCs express a polymorphic HLA transgene (HLA-E) fused to the B2M gene, which acts as a decoy to prevent lysis by NK cells. Unlike the hypervariable HLA molecules, the HLA-E transgene is the same throughout the population. Therefore, the UDCs are recognised as ‘self’ by the immune system.

How Are UDCs Developed?
Universal Cells edits genes using recombinant adeno-associated virus (rAAV)-mediated gene editing, which was first developed at University of Washington by Dr Russell. rAAV is a single-stranded DNA virus, that edits genes by homologous recombination – a process whereby two similar (homologous) DNA molecules exchange genetic material without introducing any cuts or damage to the DNA itself. The rAAV can be designed to insert any genetic material to a very precise location in the genome.

During UDC manufacturing, the HLA-E transgene described above is encoded within the rAAV and is knocked-in at the B2M gene via homologous recombination. Additionally, in order to knock-out HLA class II expression, another rAAV vector is used to eliminate the expression of a transcription factor that is necessary for the expression of all HLA class II molecules.

Advantages of UDCs and rAAV Technology
There are multiple strategies that can be employed to reduce the rejection of stem cells, including: i) HLA-typed stem cell banks, where hundreds of separate HLA-specific cell lines are produced, ii) allogenic donor stem cells, where a single line is produced and transplanted but requires toxic immunosuppressive drugs and iii) autologous induced pluripotent stem cells (iPSCs), where a patient’s own cells are isolated and manipulated to behave like a pluripotent stem cell.

A major advantage of UDCs over HLA-typed stem cell banks is that only one cell line is required. This significantly reduces the cost, complexity and time required to undertake clinical trials and eventual commercialisation. HLA-typed banks also do not solve the problem of HLA class II matching or the presentation of foreign proteins by the matched HLA molecules. 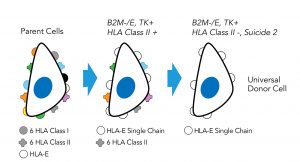 Although allogenic donor cells also entail just a single cell line, they require the use of immunosuppressants, which weaken the immune system. This reduces the incidence of rejection but also results in severe side-effects, which complicate the clinical outcome. UDCs, however, do not require immunosuppression, as there are no foreign proteins to trigger an immune response.

Current and Future Uses of UDCs
UDCs are an exciting product that will enable a new class of therapeutics to treat a variety of life-threatening diseases. For example, Universal Cells, Inc. has recently established partnerships to develop cancer therapies using universal donor T-cells (with Adaptimmune) and universal donor retinal pigment epithelium cells for the treatment of adult macular degeneration (with Healios). Other examples of applications include the development of UDC-derived keratinocytes therapies which could be applied to treat skin wounds and burn injuries, or the development of UDC-derived beta pancreatic cells to treat type I diabetes.

Overall, rAAV-mediated gene-editing technology and UDCs can have a huge impact in the healthcare industry, overcoming the obstacle of transplant rejection, revolutionising stem cell therapies and changing the way we treat genetic diseases.

How are Universal Donor Cells (UDCs) developed using recombinant adeno-associated virus (rAAV) technology?
Universal Cells, Inc. uses its rAAV-mediated genome-editing technology to engineer the HLA molecules of pluripotent stem cells and thus create cells that are universally compatible. First, a single-chain, non-polymorphic HLA class I transgene composed of the HLA-E molecule fused to the beta 2-microglobulin HLA class I common subunit is knocked-in to the beta 2-microglobulin locus. This transgene acts as a decoy preventing lysis of the modified cells by natural killer cells, but allows for the cells to avoid recognition by the immune system. Then, to eliminate all HLA class II expression, another rAAV vector is used to knock out a transcription factor (RFXANK) that is necessary for all HLA class II expression.

How can rAAV be used as a gene therapy to treat genetic diseases?
Besides using rAAV to create UDCs, this technology can also be used to directly repair disease-causing mutations in a patient’s own cells. The technology is highly flexible, and can generate any desired genetic modification, including deletions, insertions, and point mutations, and therefore could be used to inactivate genes, knock-in genes at specific loci, or correct mutations anywhere in the genome. Universal Cells, Inc. is currently developing an ex vivo gene-editing therapy based on rAAV to correct mutations that cause immunodeficiencies.

Where do you see Universal Cells in 5 years’ time?
Within the next 5 years, Universal Cells, Inc. expects to have driven our gene-therapy product for immunodeficiencies towards the clinic, obtained first in-human proof of concept of UDCs through our strategic partnerships, and have advanced our innovative cellular therapies through rigorous preclinical research and into clinical trials.

Research Objectives
Universal Cells’ core technology (rAAV-mediated gene editing) allows them to produce customised cells with insertions, deletions or point mutations at any genetic sequence. Using this technology, they are now developing Universal Donor Cells – a line of stem cells that can be used in a therapeutic setting without rejection. 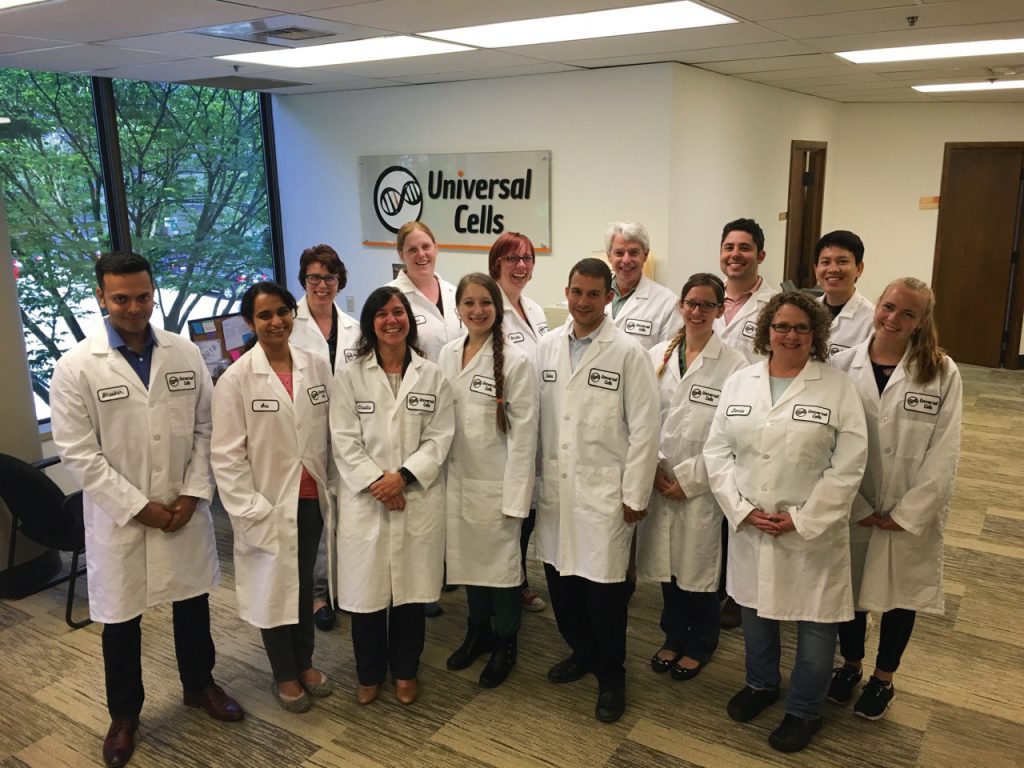 Universal donor cells – a revolution against rejection
PrevPreviousShining a light on the hidden viral infection that causes birth defects
NextThe Manchester Institute of Biotechnology: the home of beautiful biotechnologyNext

Expanding the role of nurses in HIV care in Ukraine 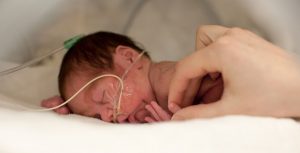 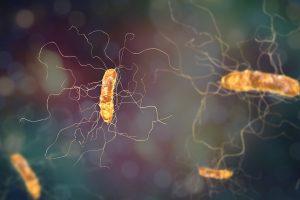