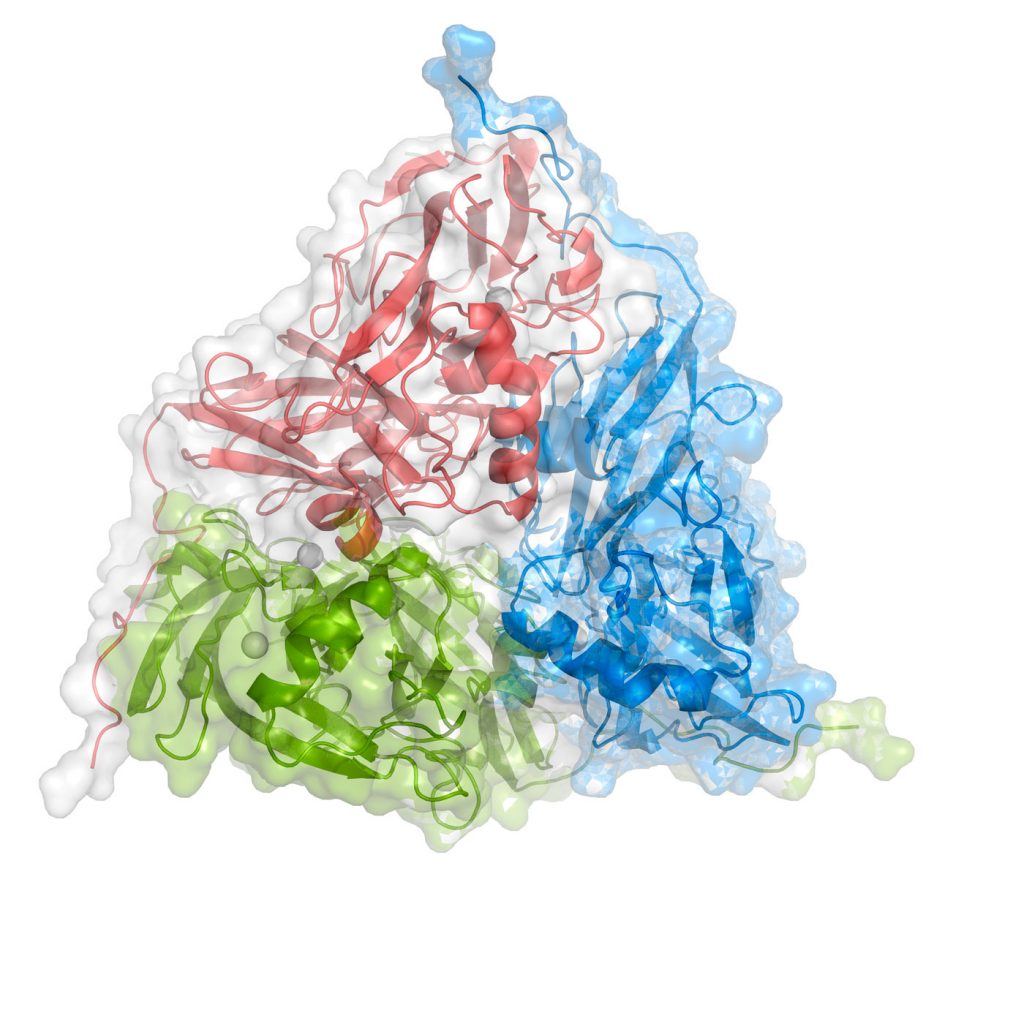 ArticleQ&ADetailDownload pdf
Principal Investigators Drs Mike Hough and Richard Strange at the University of Essex, and Drs Tom Keal and Chin Yong at STFC Daresbury, all supported by funding by the BBSRC, are using x-ray crystallography and powerful computing to uncover the mechanism and function of copper-containing nitrite reductases (CuNiRs). These enzymes are vital components of the bacterial denitrification process, which supports the global nitrogen cycle but can be overloaded by man-made nitrogen wastes.
The global nitrogen cycle is vital for supporting life on earth. Relatively unreactive nitrogen gas (N2) in the atmosphere is converted to usable ‘fixed’ nitrogen compounds by bacteria to support plant and animal growth. These nitrogen compounds, some of which are generated naturally as animal and marine wastes, are then returned to the atmosphere by denitrifying bacteria, working in stages to return the fixed nitrogen to its gaseous state.
A disrupted cycle
Balance between these elements of the nitrogen cycle is vital for the environment. However, since the discovery of industrial methods for fixing nitrogen and the rise of fossil fuel use, the addition of man-made sources of fixed nitrogen to the cycle has resulted in an excessive build-up of both nitrates (NO3–) and nitrites (NO2–). This, in turn, overloads the bacterial denitrification system, resulting in excess nitrates washing into water courses and causing algal blooms. Not only that, but nitrogen can also exit the pathway in the form of intermediate compounds, such as nitrous oxide (N2O) – a powerful greenhouse gas. A clear understanding of how the bacteria manage the cycle will help us to redress the potential imbalance.
Enzyme Detectives
Drs Mike Hough and Richard Strange at the University of Essex, and Drs Tom Keal and Chin Yong at the Science and Technology Facilities Council’s (STFC) Daresbury Laboratory, have joined forces to improve our understanding of how the enzymes in these essential bacteria perform their functions, opening the possibility that their method could be exploited to engineer synthetic enzymes with improved function.

Two different types of nitrite reductase enzyme exist, one using an iron group as the catalyst, and the other using copper. The enzyme that this interdisciplinary team are particularly interested in can be found in the soil bacterium Achromobacter cycloclastes. At the heart of this enzyme are a pair of copper atoms – one of which is ‘catalytic’ while the other donates electrons – which are bound by several different amino acid residues from the protein. These work in combination to shuttle electrons and protons into the active site so the reaction can proceed efficiently.
The team uses a combination of experimental x-ray crystallography, single-crystal spectroscopy and high-performance multi-processor computer simulations to better understand the enzyme’s function, and to reveal the key elements of its structure and dynamics as it operates catalytically to reduce nitrite to nitric oxide (NO). Their interdisciplinary approach makes it possible to visualise the entry, reduction and exit of the nitrogen compounds in the protein, as well as to identify the important functional features of the protein structure, and the locations of other components and molecules which are essential for the chemical reaction to proceed.
X-ray specs
To uncover this detailed picture of the position of atoms within the enzyme, powerful x-ray sources called synchrotrons are used to visualise crystallised versions of the proteins, performed in both a cryogenically preserved state and at room temperature. The structure of the protein can then be deduced from the way that these x-rays are diffracted as they pass through the sample. 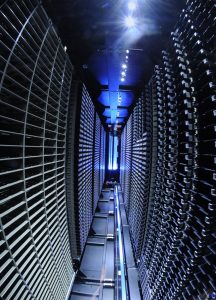 A post-doctoral researcher in the team, Dr Sam Horrell, used synchrotron x-rays to drive the enzyme reaction within the crystalline CuNiR, allowing a ‘structural movie’ of the reaction to be produced at high resolution. This experimental data, with copper oxidation states validated by spectroscopy, showed that nitrite initially binds to the catalytic copper in a ‘top hat’ configuration, like an inverted ‘v’, but then switches to a ‘side on’ configuration, before its release as nitric oxide. These data (‘frames’ from the movie) are used by the simulation team, based at the STFC Daresbury Laboratory, so that a clearer picture can be established of the likely pathways for this activity.
Computers do the leg work
Using advanced computing facilities and state-of-the-art software, both the large-scale motions of the molecules (molecular dynamics) and highly accurate calculations at the enzyme’s active site (quantum chemistry) are being performed. Postdoctoral researcher Dr Kakali Sen has already shown how behaviour of the enzyme is influenced by the protonation states (addition of a proton by binding a hydrogen atom) of critical amino acid residues, and how these are key to the entry of the nitrite to the active site and initiation of catalysis.

Thus, by combining the experimental atomic structures with computer simulations, the reaction between the enzyme and the nitrite during catalysis can be revealed: the catalytic copper first binds both oxygen atoms of the nitrite (NO2–) molecule, displacing the resident water molecules. This triggers an incoming electron, donated by the second copper atom, which changes the state of the catalytic copper and causes a switch in the conformation of the bound nitrite to ‘side-on’, in line with the experimental evidence. This binding orientation puts the nitrite in a position where an oxygen can be cleaved, leaving nitric oxide to be released into the atmosphere and returning the enzyme to its original state. Two protons are required during this reaction, provided by solvent (water) channels and residues connecting the enzyme’s surface to the catalytic site.
The limits of our knowledge?
Although many aspects of this process can be directly observed or deduced from observations, the full mechanism of the reaction and the exit route of the nitric oxide molecule, are still not clear. The protonation states of the critical catalytic residues of the enzyme at each stage of the operation have also yet to be definitively identified experimentally, as has the precise chemical structure of the intermediate nitrogen compound. This requires improved structural resolution in intact proteins – particularly difficult at room temperature – but may be possible in the future, with new techniques such as serial femtosecond crystallography.
A remaining mystery is the ‘minimum catalytic core’ – the smallest part of the enzyme that is still capable of carrying out the reaction. Identifying this through experiment and computation – one of the main aims of this work – would open the door to producing new catalysts to contribute to denitrification.
The team’s approach of using the insights gained through the structural data to inform and direct the molecular dynamics and quantum mechanical calculations, and to use these results to guide further experiments, has proved to be effective in solving some of the mysteries surrounding this vital process. Further investigations may yet reveal more of this particular enzyme’s secrets and, with it, the possibility that such power can be harnessed to bring our environmental nitrogen system back under control.

Why is understanding the nitrogen cycle so important?
This cycle is essential to plant life including agriculture, so understanding it is essential in order to provide sufficient food for a growing world population. Artificial fertilisers alter the balance of the cycle, leading to pollution and contributions to climate change. Nitrite pollution from motor engines is also a particular concern in urban areas. By understanding the enzyme reactions and organisms involved we have the opportunity to rectify the imbalance in the nitrogen cycle introduced by human activity, as well as addressing specific concerns like nitrite pollution.
What makes the copper-containing nitrite reductases so interesting?
Besides being key components of the nitrogen cycle, these enzymes exquisitely control electron and proton delivery to their active site for efficient catalysis and their function is closely linked to their structure and dynamics. As such they are a fascinating enzyme class to study by combining computation and experiment.
How does x-ray crystallography help us to understand protein conformation?
X-ray crystallography reveals the positions of the individual atoms that make up the enzyme molecule and how these are bonded to each other. The ‘structural movies’ approach allows us to track how the three-dimensional structure in the crystal changes as the enzyme reaction proceeds.
Why are you confident that the computer simulations and calculations are valid?
We base the simulations on our highly accurate experimental atomic structures and apply to these structures computational methods that are well-tested and validated on other systems. Our computational results make important predictions that we experimentally test for further assurance. This gives us confidence that the ‘hidden’ or experimentally inaccessible catalytic processes that we model by computation are valid.
What is the next step for this research?
We are already addressing the current limitations of our knowledge on the copper nitrite reductases by extending our experimental methods. For example, exploring temperature-dependent reactions, new methods for obtaining room temperature atomic level enzyme structures, and obtaining new structures using X-ray free electron lasers. In each case we are linking the structural data with computational chemistry. We will in the future be applying the overall methodology used here to several other enzyme reactions of importance to the environment, biotechnology and human health. 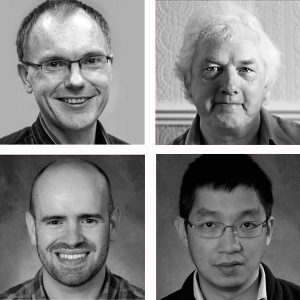 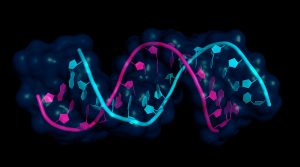 MicroRNAs as the micro managers of gene expression 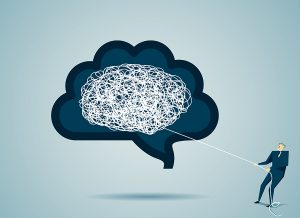 Decoding Language in the Brain