Ageing, longevity, and neurodegenerative diseases are key concerns for public health that we are collectively struggling to fight. In their recent studies, researchers from Paris‑Saclay Institute of Neuroscience, Dr Jean-René Martin and his team, highlight the importance of a newly discovered type of small nucleolar RNA (snoRNA). The researchers call it jouvence (jou), meaning ‘youth’ in English, and it is expressed mostly in the gut. Jou is involved in the regulation of several genes implicated in metabolic pathways, as cholesterol and lipids, both in flies and humans. These are all responsible for a healthy lifespan, and therefore could be connected to prevent neurodegenerative diseases, and even cancer.

Ageing, longevity, neurodegenerative diseases, and metabolic disorders are some of the major public health concerns of our time. What all these have in common is that they are a result of accumulated damages at molecular, cellular, tissue, and organ levels, which leads to an increased vulnerability to disease.

Long years of research have established that there are several genes involved in controlling longevity, along with various environmental factors, such as diet or stress. More recently, however, scientists have found that certain types of non-coding RNAs, the snoRNAs (small nucleolar RNAs), are also involved in regulating the lifespan of an organism.

The snoRNAs are a group of non-coding RNAs generally located in introns, which do not turn, or transcribe, into proteins. Rather, they perform basic and essential regulatory functions in the cell, such as modifying and helping other types of RNA mature, principally ribosomal-RNA, as well as potentially regulating the transcription or the chromatin structure of the chromosomes.

The snoRNA molecules are also persistent in an evolutionary sense among various animals. The fact that some of them can be found across model organisms such as the Drosophila fruit fly or the mouse, as well as in humans, can be extremely useful for finding new and thorough approaches to the exploration of ageing processes and degenerative diseases.

Researchers from Neuroscience Institute of Paris‑Saclay, Dr Jean-René Martin and his team, have studied these important snoRNAs for almost a decade, yielding a number of fundamental findings that might help us tackle a plethora of serious health concerns. They have focused on a particular snoRNA they have named jouvence (or jou – meaning youth in English). While jou can be found in different tissues and organs across different species, in Drosophila, its major effects have been demonstrated when it is expressed in the gut.

The French research team is using Drosophila fruit flies as a model to explain how and why deletion of jou from the gut enterocytes – the main cell types in the gut lining – might reduce lifespan, whereas overexpressing jou increases lifespan. In order to undertake this research, they look at jou’s functions and characteristics in both flies and humans.

In their experiments, Martin and his colleagues found that the jou levels in Drosophila’s gut are related to some genes that regulate stress resistance in the body. For example, loss of jou function leads to a lowered resistance to desiccation, but also alters its effect on the starvation response depending on the age of the flies; when jou is deleted from the cells of young flies, their resistance to starvation increases, but in old flies, it decreases.

“The researchers concluded that a targeted expression of jou could control the expression of ninaD, which could help regulate cholesterol levels.”

Jou is also involved in the regulation of the insulin-signalling pathways and cholesterol homeostasis (stability) in humans, as determined in cell cultures. These processes are essential for maintaining normal cell function and, therefore, affect their longevity. Jou interferes with the expression of several RNAs (about 600 in Drosophila, and up to 6,000 in humans), downgrading some components in the insulin-signalling pathways and upregulating others. Moreover, its depletion also deregulates some of the cholesterol metabolic pathway genes (and their mRNA), and upregulates them when overexpressed, such as the 3-hydroxy-3-methylglutaryl-CoA reductase (HMGCR), which is the key enzyme for cholesterol synthesis. In addition, since some other snoRNAs have been shown to regulate the transfer of cholesterol between the plasma membrane and the endoplasmic reticulum in the cell, the researchers hypothesise that jouvence could also act similarly, which could confirm its importance in cholesterol homeostasis.

Other recent studies have shown that few other types of snoRNA participate in other stress responses and metabolisms, such as the oxidative stress response, or glucose metabolism. The fact that jouvence affects the lipids and cholesterol metabolisms, as well as the insulin pathways, means that it could also potentially be used in tackling diabetes, obesity, and hypertension problems in humans, and therefore possibly reducing the risk factors for cardiovascular diseases.

In Drosophila, jou loss leads to gut hyperplasia – or abnormal cell reproduction – of the gut lining. Flies who have jou deleted show increased levels of hyperplasia (overproliferation), whereas overexpression of jou has been shown to prevent it. The reduced level of jou in the gut is also linked, among other deregulated genes, to the deregulation of the ninaD gene, which is involved in the transportation and storage processes related to cell and cholesterol homeostasis. Flies who had jou deleted also showed a decrease in cholesterol in the plasma membrane of their enterocytes. Therefore, the researchers have been able to demonstrate that in jouvence-deleted flies, a targeted expression of jou could restore the expression of ninaD, which could help regulate cholesterol levels as well as offering important protection from further development of a variety of neurodegenerative diseases. Similarly, and alternatively, again in jouvence-deleted flies, ensuring a normal expression of ninaD in the gut (using a ninaD-RNAi) was found to restore the mRNA level of ninaD and thereby contribute to the extension of lifespan. 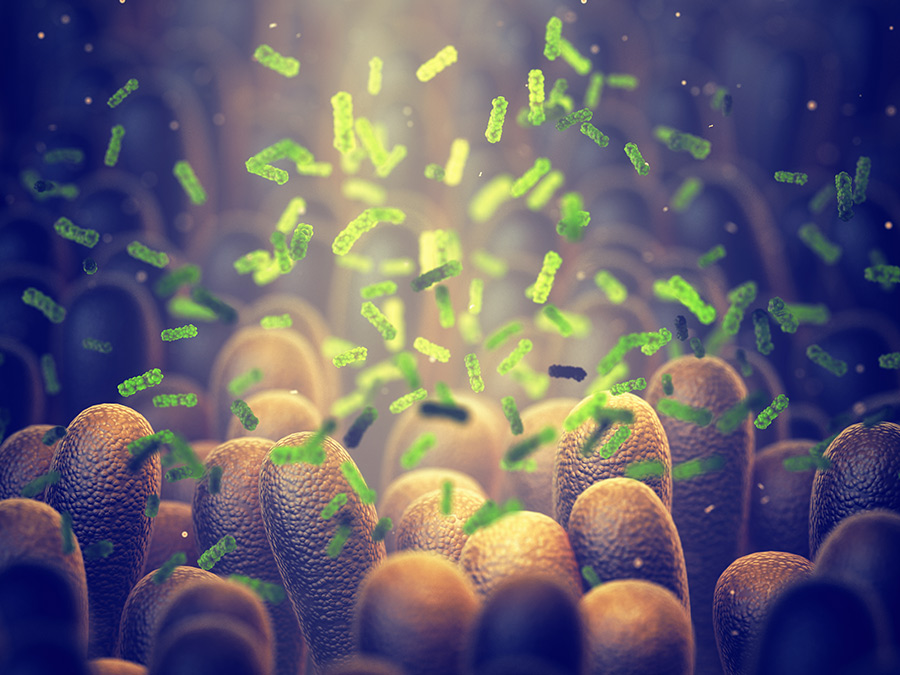 Cholesterol is implicated in disorders including Niemann-Pick (a rare inherited disease which affects the body’s ability to metabolise cholesterol) and Alzheimer’s. Martin and his team have shown that jou-deleted Drosophila flies have reduced cholesterol-ester, and present more neurodegenerative lesions when compared to flies with a normal level of jou. Humans with impaired cholesterol homeostasis show a higher damage progression of Alzheimer’s disease, which could potentially help researchers to trace a vital link between jou and cholesterol regulation.

Taken together, these diverse and wide-ranging findings show that jou is responsible for controlling longevity and might have a direct impact on neurodegenerative diseases through its regulation of genes involved in cholesterol metabolism in human. This will likely prove that jou could be a cornerstone for further treatment developments.

Another serious variety of diseases that turns out to be affected by jou is cancer. Martin and his research team have done a number of experiments in order to reach meaningful results that could potentially help us to tackle various cancers. In one of their studies on human snoRNAs, they reported that, to put it simply, jou overexpression stimulates cell proliferation both in non-cancerous and immortalised cancerous cells (cells which can repeatedly undergo division and can therefore be grown in vitro for longer periods). In some cell lines, the researchers measured cell growth enhancement twice or more over a week. Thus, overexpression of jou in humans along with certain other genes, manages to reorientate cells toward de-differentiation, or reverse growth, meaning that the cells lose their morphological structures and functions, and become like pluripotent cells (or stem cells). This process of de-differentiation could be compatible with, or partially resemble, a ‘rejuvenation’ process of the cells, but this is yet to be investigated further.

By contrast, decreasing jou (known as knockdown), with the help of some other RNAs (named siRNA), leads to inhibiting cell proliferation, a biological process that could be potentially used to kill or eliminate cancerous cells. Various other snoRNAs were also found to be involved in the initiation, invasion, and spreading of tumours. For instance, the p53 gene pathway suppresses development of tumours and is affected indirectly by jou via the genes (encoding for enzymes) that regulate it. Indeed, when the effect of jou was knocked down, the ribosomal dysfunction was found to increase, resulting in lower cell proliferation and tumour shut-down. Something similar was also found to be the case with other cancerous cell types, such as Caco-2 cells in the colon adenocarcinoma, the A549 cells in lung cancer, MCF7 in breast cancer, or the U87 cell line in glioblastoma in the brain. Decreasing the snoRNA-jou could serve as a significant novel approach to controlling and blocking the proliferation of various types of cancerous cells in the human body, which Martin’s team are referring to as snoRNA therapy.

These groundbreaking findings could initiate a new beginning for treating several key health concerns: namely, neurodegenerative diseases, obesity, and diabetes (through jou overexpression), and cancer (through knocked-down jou expression). This is the reason why the researchers from the Neurosciences Institute Paris-Saclay are waiting for a patent approval on the therapeutic uses of jouvence for treatment of cancer in humans. This could potentially give a huge boost to the fight against cancer, with huge life-saving consequences across the world.

How much time will it take, in your opinion, until this is used widely as a treatment method for various diseases, so that it is accessible to everyone in the public?
Several fundamental questions still remain to be elucidated before we can use the snoRNA-jouvence as treatment. These questions concern, for example, its molecular mechanisms as well as which precise molecular pathways are affected by jouvence. Concerning its uses as treatment, several applied questions will have to be solved, such as, how can we carry and deliver it into the human body, and how can we target jou (or siRNA against jou) to a specific cell type? Therefore, depending on the extent to which public and private fundings will support jouvence research, we think and hope that it could take only between 10 to 20 years before some snoRNA therapy could be available.

Jean-René Martin received his doctorate in veterinary medicine from Montréal University (UdM), Québec, Canada, in 1984. After two years of teaching farm animal practice at UdM, he moved to the Pasteur Institute, Paris, France, where he obtained a PhD in 1993, in genetic and molecular biology in Drosophila. He then worked as a post-doc, studying neuroethology in Drosophila, in Würzburg University, Germany, until the end of 1999. In 2000 he started his own lab, and since 2006 he has been Research Director, CNRS, at the Neurosciences Institute Paris-Saclay, France, where he is studying the mechanisms of ageing, longevity, and neurodegeneration.

PrevPreviousThe design of GUMBOS and nanoGUMBOS: Versatile compounds with a wide range of applications
Next3D measurement of brain arteries: What can we learn?Next

Understanding the relationship between obesity and asthma