ArticleQ&ADetailDownload PDF
Professor Bin Wang (University of Hawaiʻi at Mānoa, USA) is working to improve the understanding of a globally important atmospheric system, named the Madden-Julian Oscillation (MJO). This system has a profound impact on the weather in the tropics, and can even have significant impacts on extreme storm events including those witnessed in the US. While the MJO is a well-documented phenomenon, its origin is still yet to be understood on a scientific level. Prof Wang and his team are building upon existing theories on how it operates, and how to best simulate it in different geographical conditions.
As it is often said, the weather acts in mysterious ways. Although it is possible to predict weather, readings are not always reliable, as there are so many interlinking environmental factors and stochastic processes involved. However, to climate scientists, there are re-occurring patterns in the weather, such as frequency of rainfall, and the motion of winds, which can be observed and shown through models such as global climate models. Different weather systems combine together over time, to reveal patterns in the way they circulate across the globe, which can be measured and predicted. The planet has various circulation systems, comprising patterns of winds that transport heat from tropical latitudes to polar latitudes. One major system is the Madden-Julian Oscillation (MJO), which represents specific patterns in tropical weather occurring over weekly to monthly timespans. This transpires as an amalgamation of cloud and rainfall, near the equator, propagating towards the east. Unlike other climatic circulation systems, such as the El Niño, it is not dormant.
What is the Madden-Julian Oscillation?
The MJO travels eastwardly through the atmosphere of the tropics, above the warm zones of the Indian and Pacific oceans, bringing with it clouds, rainfall and changes in pressure and winds. It re-occurs roughly every 30 to 60 days, in which time it creates particularly strong rainfall effects from the Indian to the central Pacific Ocean, at a speed of around 5 metres per second. There are two main phases in this system. In the ‘enhanced convective phase’, winds amalgamate and air rises, until they diverge at the top of the atmosphere, often igniting cloud formation and rainfall, and even storms. In the ‘suppressed convective phase’, winds converging at the top of the atmosphere push air downwards, which sink, and diverge at the Earth’s surface. As it sinks, the air warms and dries, suppressing rainfall and enhancing aridity as a result.

This process can have an impact on intense weather events such as tropical storms, floods, droughts, tornados and more. To help us understand its underlying physics, and prepare for hazards, we must predict its behaviour in different geographical regions and conditions. Prof Wang and his colleagues are facing the challenge of predicting and simulating the MJO, in different climate systems and regions of the Earth. Prof Wang’s team are curious to uncover the reasons for its mysterious behaviour, such as its unique periodicity, eastward propagation, preferred planetary scale, amplification over warm ocean and disintegration when reaching the cold zone of the Central-Eastern Pacific Ocean.
Refining the model
Researchers at the University of Hawaiʻi and Nanjing University of Information Science and Technology believe that prediction models have much room to improve, having been in development since the 1990s. They say that “understanding the origin and perpetuation of the MJO has eluded scientists for decades”, in an article published in Geosciences Letters in 2016. In the same year, they published a study advancing a ‘general theoretical model framework’ for understanding the underlying fundamentals of MJO dynamics, where they built upon an existing theory. In their parameters, they included moisture feedback mechanisms in response to precipitation; and the interactions taking place among atmospheric waves at the equator where the MJO interacts with the Earth’s physical ground surface.


Together they considered details about the MJO, such as the MJO’s slow speed of propagation towards the east, and the specific wave structure driving the oscillation, with two atmospheric waves named ‘Kelvin’ and ‘Rossby’ which couple together and propagate to the east. While the ‘Rossby’ wave derives from the rotation of the Earth, the ‘Kelvin’ wave balances the atmosphere’s response to the Earth’s rotation caused by the ‘Coriolis force’. In multiple articles published by Prof Bin Wang and Dr Fei Liu, a model they developed named ‘tri-interaction theory’ shows that the basic physics of the MJO comes from the interactions of atmospheric heating, moisture and wave dynamics, as Prof Wang describes “The trio-interaction theory demonstrates that the essential physics of MJO is rooted in the trio-interaction among the atmospheric heating, moisture, and dynamics of wave and planetary boundary layer”.
The importance and impact
This improved model can help explain the behaviour of the MJO, such as why it operates at such a large degree (planetary scale), how the eastward propagation speed is driven, and the reason for its 30 to 60 day periodicity. This refined model they developed has complied well with other publications, comprising prediction models, and real-world observations. The tri-interaction theory has helped to reveal that the MJO is sensitive to cumulus cloud related convection patterns (heating and cooling processes). Therefore, prediction could be improved when putting more emphasis on representing the effects of cumulus cloud-derived convection processes, and the interaction of moisture differences when clouds drop upon the Earth’s surface.

The weather produced by the MJO impacts the tropics as well as the middle latitudes beyond the tropics. It can even have an impact on the magnitude of monsoons and flooding, which can lead to catastrophic results. Therefore, researchers such as Prof Wang who are creating increasingly reliable prediction tools, are indirectly helping to aid hazard risk assessment and preparation in countries affected by the MJO.

Why is the MJO such an important system?
Beyond the range of weather forecast (one week to 10 days), subseasonal forecast on a time scale of 2 to 8 weeks is of great societal demand. On the subseasonal time scale, MJO is the dominant source of climate variability and predictability. Understanding MJO dynamics lays a physical foundation for subseasonal prediction in the tropics as well as extratropics.
Why has the MJO been such a challenging subject of study?
MJO involves complex interactions among multi-spatial and temporal scale atmospheric motion and variations of the underlying ocean/land surface variations. The processes determining the MJO behaviour involve convective interaction with dynamics (wave and planetary boundary layer), moisture, and cloud-radiative feedback. Each of the feedback processes depends on how the convection is parameterised in the models. There are numerous uncertainties involved in convective parameterisation and boundary layer parameterisation. This poses great difficulties for modelling realistic and diversified MJO behaviour. Theoretical studies have to understand how MJO properties change with deferring parameterisation schemes and the roles of the wave feedback, boundary layer feedback, cloud-radiative feedback and moisture feedback and their combined impacts on the essential MJO dynamics, as well as understand how the seasonal varying basic flows and atmosphere-ocean interaction, and the effects of synoptic eddies change MJO behaviour.
How can society benefit from improved prediction methods of the MJO’s behaviour?
Prediction of extreme weather events 2 to 8 weeks ahead has immense social-economic benefits for hazard prevention, risk management, economic planning, and shaping policy decision making. Many critical decisions must be made several weeks in advance of potentially favourable or disruptive environmental conditions. High-quality predictions 2 to 8 weeks ahead have potential values for many industries – for example, energy, water resource management, and agriculture. For example, farmers can purchase seed varieties that are most likely to increase yields and reduce costs; water resource managers can make better decisions about reservoir levels in the weeks ahead of eventual water consumption; disaster mitigation managers can move emergency and disaster-relief supplies to areas that are likely to experience extreme weather or an infectious disease outbreak; naval and commercial shipping planners can designate shipping routes weeks in advance, seeking to stage assets strategically, avoid hazards, and/or take advantage of favourable conditions.
To what extent can the MJO affect weather patterns in other parts of the globe, beyond the equator?
The MJO modulate occurrences of many types of extreme weather in the global tropics and extratropics, including flooding, droughts, heavy snow storms, cold surges, heat waves, hurricane and tropical storms, wild fire, aerosols, tornado, hail days, and many more. Using the US as an example, the frequency of extreme precipitation events over California are more common when tropical activity associated with the MJO is high. During the winter of 2009/2010, the MJO with its unusual active convection over the equatorial central Pacific caused heavy snowstorms, resulting in tremendous amount of snowfall over the eastern US. MJO is found to regulate Atmospheric Rivers and associated snow pack over the Sierra Nevada. Over the Gulf of Mexico and the Caribbean Sea, remarkably more hurricanes occur during the MJO active phases than in its inactive phase. The violent tornado outbreak days in spring are more than twice as frequent during a specific MJO phase as in other phases.
What lies ahead in the next step of your research?
The research in my group is heading toward two interrelated frontiers in the MJO study. One is to improve climate model’s capacity in modelling and predicting MJO, and the other is to find ways to improve subseasonal prediction of extreme and disruptive events. In the first front, we explore why some models failed to produce realistic MJO, and how to improve these models with the guidance of the MJO theory. In the second front, we investigate the physical processes by which MJO modulates occurrences of extreme weathers, and establish physics-based prediction models as a complementary tool to the global climate models’ prediction.

Research Objectives
Professor Bin Wang and his team aim to improve the understanding of a globally important atmospheric system, named the Madden-Julian Oscillation (MJO). This system has a profound impact on the weather in the tropics, and can even have significant impacts on extreme storm events. Prof Wang and his team are building upon existing theories on how MJO operates, and how to best simulate it in different geographical conditions.
Funding
National Science Foundation (NSF)
Collaborators 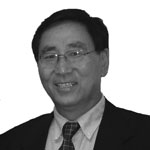 Dr Bin Wang is Professor of Atmospheric Sciences at University of Hawaiʻi. He specialises in Climate and Geophysical Fluid Dynamics. He was elected Fellow of AMS and AGU and received the Carl-Gustaf Rossby Research Medal. His publications are cited over 30,000 times with 98 papers having more than 100 citations each (Google Scholar).
Contact

Precipitation changes in a warming climate