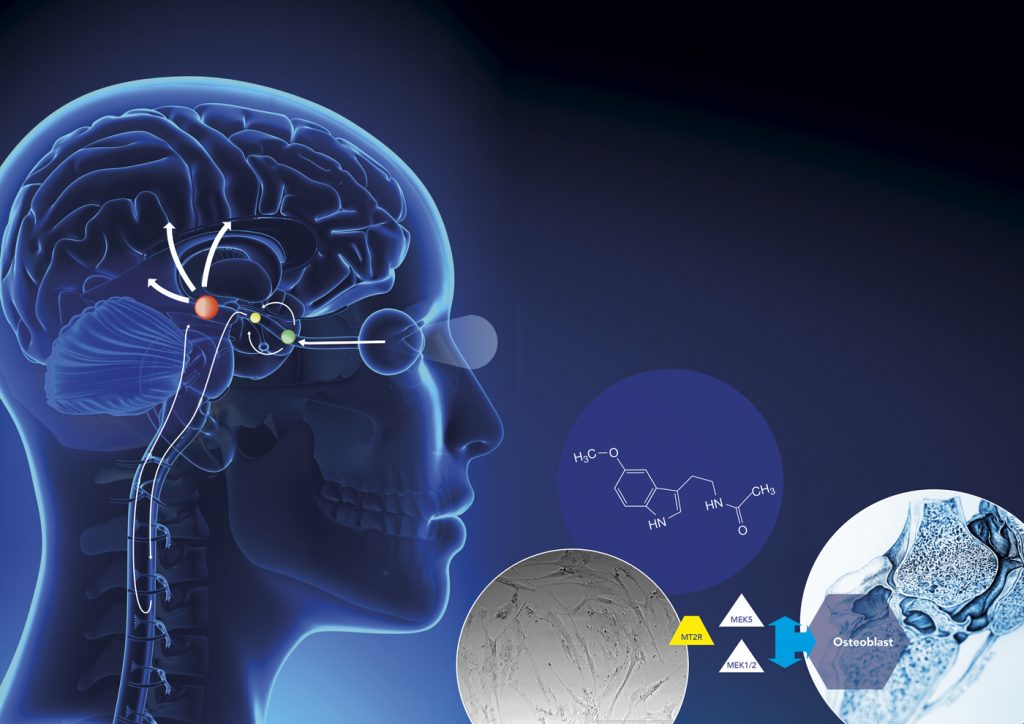 ArticleQ&ADetailDownload pdf
Melatonin is often perceived as the hormone of sleep, yet its mechanisms and functions have much broader implications. Through a series of biological dynamics, melatonin is known to help the body maintain circadian rhythms, but research has also linked it to bone health and relief from menopausal symptoms. Professor Paula Witt-Enderby, working at Duquesne University in Pittsburgh, has been investigating the ways in which melatonin communicates its messages through cells, while also assessing its possible effects on human health, both when taken alone or combined with other compounds.
Melatonin, a hormone secreted by the pineal gland, a small mass of tissue within the brain, is known to help the human body to control sleep and wake cycles. Individuals who have trouble sleeping due to jet lag or insomnia can choose to take melatonin supplements, which encourage that feeling of drowsiness that generally takes over in the evenings, when the body is naturally preparing for sleep. Yet this hormone has been found to have other interesting effects, which may not yet be as well-known but are nonetheless of crucial importance for the healthy functioning of the body.
Melatonin and circadian rhythms
Circadian rhythms are defined as a series of physical, mental, and behavioural changes that occur throughout a daily 24-hour cycle. They are found in most living beings, including plants, animals, and even microbes. Melatonin plays a huge part in regulating circadian rhythms, opening the ‘sleep gate’ that generally precedes a good night’s rest. In humans and most diurnal animals, melatonin is secreted at night, from two hours before one’s regular sleeping time. The main role of melatonin is that of mediating signals of darkness and conveying this information to the body so that it can adapt its biological clock accordingly; making it more of a ‘hormone of darkness’ than a ‘hormone of sleep’. This biological function is the most commonly associated with melatonin, but studies have found that it is far from the only one.
Researching melatonin and its communication mechanisms
Prof Paula Witt-Enderby has carried out extensive research into the role of melatonin for the healthy functioning of the human body. She says: “My work over the last 22 years has focused on the molecular mechanisms (or proteins that work in tandem) to take the melatonin signal from the outside of the cell to the inside of the cell to produce a desired cellular effect.”

In my research with melatonin, lifestyle and diet play an important role since sleep and stress strongly modify melatonin levels in the body

Her findings include discovery of a number of key signalling proteins that convey melatonin signals within the body, including MT2 melatonin receptors, which reside on the outside of a cell and receive the melatonin molecule, as well as MEK1/2 and MEK5, proteins that regulate cell differentiation and proliferation. When these proteins are blocked using inhibitors, the effects of melatonin on bone marrow-derived cells, which Prof Witt-Enderby’s research previously found evidence for, also appear to be blocked.
The effects of melatonin on cells
Prof Witt-Enderby observed that treating cells with melatonin tended to change their shape and she hence decided to investigate whether it could also affect their function. Notably, Prof Witt-Enderby’s studies show that proteins such as MEK1/2 and MEK5 coordinate the transformation of mesenchymal stem cells (a type of cell that can differentiate into a variety of other cell types) into osteoblasts, cells that secrete the substance of bone. A greater number of osteoblasts in the body leads to more high-quality bone being formed, so finding ways to prompt their proliferation could help prevent and treat bone-related diseases.
Prof Witt-Enderby’s research also shows that melatonin plays an important role in bone formation and restructuring. The hormone could therefore potentially be used to reverse bone loss caused by osteopenia and osteoporosis, conditions that result in a reduction of protein and mineral content of bone tissue. Melatonin was also found to affect other types of cells, for instance turning mammary glands into mature structures that resemble broccoli, making them more resistant to breast cancer.
Combining melatonin with other chemical compounds
A translational research scientist, Prof Witt-Enderby always tries to find ways in which scientific findings can be applied to medical practice. Through several clinical trials, her team assessed the efficacy of melatonin, either alone or in combination with other micronutrients to prevent or reduce bone loss. In a recent study, she assessed the efficacy of melatonin in combination with micronutrients (strontium citrate, vitamins D3 and K2) on bone health, mood, and menopausal symptoms. Her results suggest that MSDK therapy, which involves taking a plant-derived vitamin K2, could help to prevent and treat osteopenia, osteoporosis, and other bone-related diseases. She also shows that melatonin might provide relief from menopausal symptoms, such as irritability, sleep disturbances, anxiety, and depression.

Her work has highlighted the benefits that melatonin could have for a number of conditions, ranging from bone-related diseases to menopausal symptoms

Prof Witt-Enderby believes that lifestyle plays a fundamental role in the healthy functioning of the body, aiding or impairing the effects of melatonin on circadian rhythms. She says: “In my research with melatonin, lifestyle and diet play an important role since sleep and stress strongly modify melatonin levels in the body and research is showing how this impacts human health; in other areas of research circadian disruption through shift work, light exposure at night, menopause, stress and aging has been demonstrated to increase one’s risk of hip and wrist fracture, breast cancer and metabolic disorders.”
The many functions of melatonin
Prof Witt-Enderby’s research provides extensive evidence that melatonin does more than help maintain circadian rhythms. She says: “I am now at a point in my career where everything is coming together because we are now showing that melatonin causes mesenchymal stem cell differentiation into osteoblasts by preventing the cells from moving down an adipogenic lineage and towards an osteoblastic lineage.” Her work has highlighted the benefits that melatonin could have for a number of conditions, ranging from bone-related diseases to metabolic syndrome. “There is further data out there to shown that melatonin decreases total fat mass and increases lean body mass and increases bone density,” she adds. “We have to look at the whole picture when trying to figure out how melatonin works in the body” she adds.
Future studies and clinical trials could help to broaden the scientific understanding of the benefits of melatonin further, as well as the specific dynamics behind its effects on the human body.

When and how did you first start researching melatonin and its functions within the human body?
In 1995, I was a postdoctoral fellow at Northwestern University Medical School on a National Research Service Award (NRSA) working on muscarinic receptor desensitisation by phosphorylation. Being early in my career, I was afforded the opportunity to transfer my NRSA and focus my attention on the newly cloned MT1 and MT2 melatonin receptors and assess how these receptors responded to a physiologically relevant melatonin signal. These discoveries have led me down the path of melatonin/melatonin receptor-mediated cellular differentiation and the impact on mammary gland differentiation and breast cancer and osteoblast differentiation and bone disease.
During your extensive research career, what do you feel are your most striking findings and why?
For a long time, the proteins relaying melatonin’s signalling within cells were not clear and my work on MT1 and MT2 melatonin receptor signalling especially through the mitogen activated protein kinases, MEK1/2 and MEK5, has greatly advanced our understanding. My research on osteoblast differentiation following melatonin exposure demonstrated a critical importance of MT2 melatonin receptors in mediating these effects. This work has also led to three clinical trials – two using melatonin alone and one using melatonin in combination with micronutrients – which demonstrated bone-protective actions in perimenopausal women and postmenopausal women with osteopenia.
Could you provide a few examples in which lifestyle or diet impact on the levels of melatonin in the human body?
The pineal production of melatonin is inhibited by light and so use of night lights, electronic devices, alarm clocks, television and street lighting right before bed and during sleep could delay the timing of the nocturnal surge of melatonin and the magnitude of the rise. Shift work and disrupted sleep could misalign the melatonin rhythm with the light/dark cycle; this could adversely affect organ function (e.g., liver and bone) since many have their own intrinsic clocks and are synchronised by melatonin. The production of melatonin in the GI tract can improve the microbiome and can protect the gut against oxidative damage and so nutrient- and melatonin-rich foods may provide protection.

Future work will become more integrative, assessing the interplay between diet and lifestyle on melatonin levels

After studying melatonin for many years, what would you say makes it so important for the health of living beings?
Melatonin is a versatile molecule. Depending on its concentration, melatonin’s actions can switch from receptor-mediated to receptor independent; lower levels of melatonin (picomolar to micromolar range) can work through melatonin receptors located on the plasma membrane or mitochondria while higher levels of melatonin (micromolar to millimolar range) move its actions more towards inducing antioxidant enzymes and free radical scavenging. These unique characteristics of melatonin make it safe to consume and highly efficacious.
What are your plans for future research and investigation?
My future work will become more integrative, assessing the interplay between diet and lifestyle on melatonin levels and on the efficacy of melatonin to maintain or improve bone health in healthy and susceptible populations – both males and females. I also am trying to move my three patents to clinical use to prevent and/or treat breast cancer and to prevent and/or treat bone disease.

Research Objectives
Professor Paula Witt-Enderby’s research is focused on melatonin receptor signaling and cellular differentiation. Taking a translational approach, she has conducted the first two clinical trials in the world assessing the efficacy of melatonin alone or in combination with micronutrients to improve bone health and quality of life in peri- or post-menopausal women.
Funding 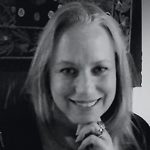 Beyond sleep: exploring the ways in which melatonin communicates with cells
PrevPreviousLAUGH improves wellbeing, happiness and quality of life of people living with advanced dementia
NextSmall but perfectly formed: how zebrafish model the human brainNext

A medicine of the person: The philosophy 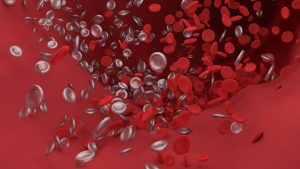