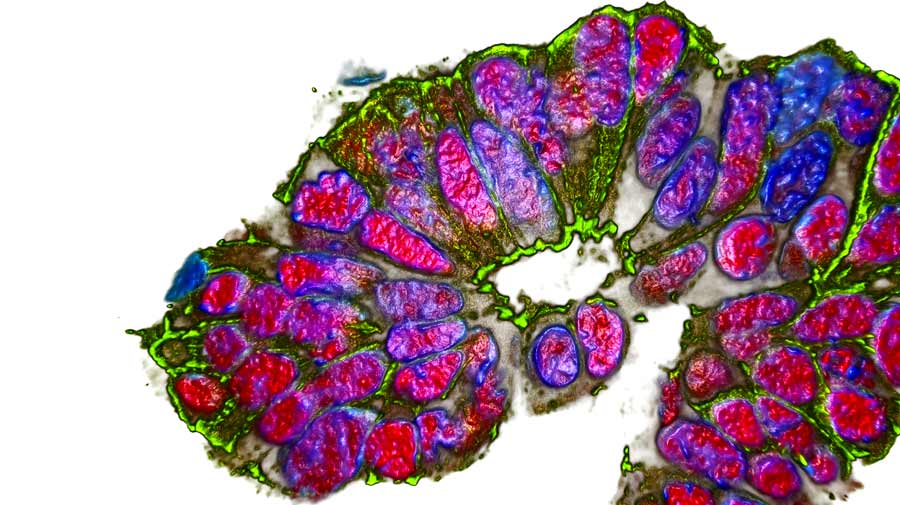 How can the cytoskeleton stop breast cancer spreading?

ArticleDetailDownload PDF
Breast cancer is one of the leading causes of cancer-related deaths in women worldwide. Prolonged exposure to oestrogen has been suggested to increase the risk of developing breast cancer, yet evidence suggests oestrogen may also have a protective role in preventing metastatic disease. Dr Ghassan Mouneimne, Assistant Professor of Cellular & Molecular Medicine at the University of Arizona, his graduate student Marco Padilla-Rodriguez, and collaborators have investigated oestrogen’s effects on the actin cytoskeleton to elucidate the hormone’s opposing functions in breast cancer.

Breast cancer metastasis is one of the leading causes of cancer-associated mortality in women globally. Breast cancers can be defined into subgroups, the most common of which being oestrogen receptor-positive (ER+) breast cancers, responsible for approximately 70% of all breast cancer cases. ER+ breast cancers are so-called as the cancer cells have receptors for oestrogen, suggesting that these cancer cells, like normal breast cells, may receive signals from oestrogen to promote their growth.

Oestrogen stimulates growth via cell division in the epithelial cells that line breast ducts. Oestrogen enters the breast epithelial cell and is translocated to the cell’s nucleus via oestrogen receptors (ER). Oestrogen activates ER as a transcriptional regulator, enabling ER to activate or suppress the expression of specific genes. Among the genes regulated by ER are those involved in cell division initiation. The greater the number of cell divisions, the greater the risk for a random mutation to occur that can result in an aberrant cell cycle, and ultimately, cancer.

Evidence suggests that an increased exposure to oestrogen due to late menopause or early menarche increases a woman’s risk of developing ER+ breast cancer. For example, a 1-year delay in menarche onset is associated with a 5% risk reduction in developing breast cancer later in life, and a 1-year delay in menopause onset is associated with a 3% risk increase. Other factors, such as having children, obesity, and genetic mutations have been implicated in affecting the risk of developing breast cancer.

Tumour metastasis is a multistep process involving cell cytoskeleton remodelling to enable cell invasion and the spread of cancer.

ER+ breast cancers may be treated with chemotherapy, but this is a non-specific treatment that can result in harmful and significant side effects. Anti-oestrogen hormone therapy is, in contrast, a specific treatment that functions to either reduce the amount of oestrogen in the body or to limit oestrogen’s growth-promoting effects with selective oestrogen receptor modulators, such as tamoxifen. Long-term adjuvant tamoxifen treatment has been shown to reduce mortality by 30% in ER+ breast cancer patients of any age. However, approximately 50% of ER+ breast cancer patients do not respond to such hormone therapies, and 25% of patients later develop metastatic cancer.

Tumour metastasis is a multistep process involving cell cytoskeleton remodelling to enable cell invasion and the spread of cancer. An early step in metastatic invasion is the formation of cell membrane protrusions, generated by the polymerisation of actin filaments (part of the cytoskeleton). Actin filament polymerisation is a dynamic process with essential roles in cell division, cell motility, and maintenance of cell shape. After actin-driven membrane protrusions form, the cancerous cell can breach and migrate through the extracellular matrix and be transported around the body via the circulatory system, the lymphatic system, or through the body wall into abdominal and chest cavities.

The role of actin
Oestrogens role in ER+ breast cancer development is complex. The regulation of actin remodelling by hormones is currently poorly understood. Dr Ghassan Mouneimne, an Assistant Professor at the University of Arizona, and his team, led by his graduate student Marco Padilla-Rodriguez, have been investigating the relationship between oestrogen and actin-dependent ER+ breast cancer metastasis.

In a meta-analysis, looking at 17,497 patients from 10 cross-sectional studies, Mouneimne and his group found postmenopausal patients (lacking oestrogen) who developed breast cancer whilst receiving oestrogen in hormone replacement therapy (HRT) had a reduced risk of developing metastatic tumours. This apparent contradictory role of oestrogen in ER+ breast cancers, promoting cancerous growth yet limiting cancer dissemination and metastasis, has been the focus of Mouneimne’s lab’s latest work. 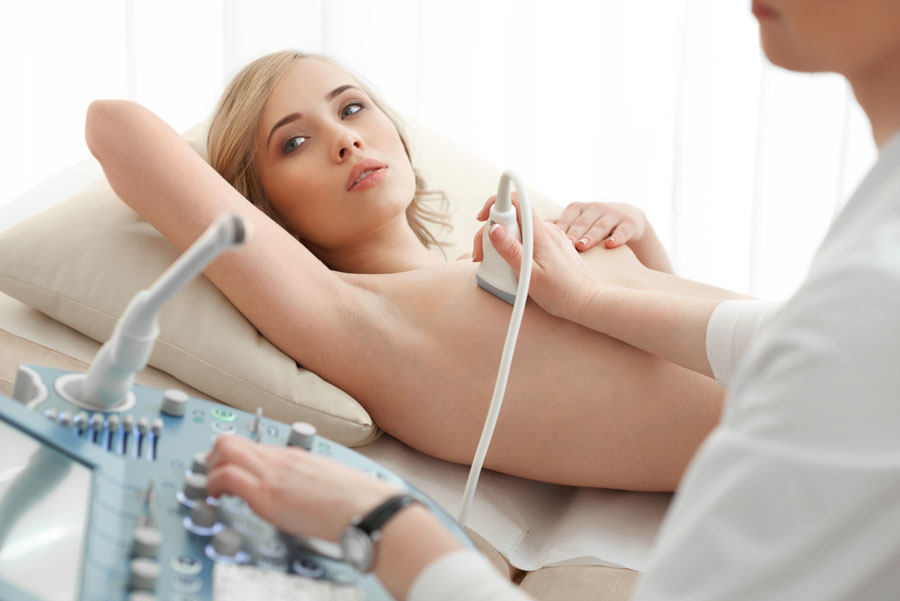 Mouneimne’s group analysed cancerous tissue and cell samples to identify the action of ER. ER is found to suppress the invasiveness of breast cancer cells by regulating the expression of actin-binding proteins, affecting the formation of actin-driven cell membrane protrusions. Among the regulatory targets of ER are genes responsible for proteins involved in the formation of suppressive cortical actin bundles, or SCABs. SCABs are bundles of actin generated by limiting branched actin polymerisation and increasing cross-linking of actin filaments, thereby suppressing the formation of membrane protrusions. Ena/VASP-like (EVL) protein was found to be most highly expressed ER regulatory target in ER+ tumours (compared to ER-negative tumours). EVL is a member of the Ena/VASP protein family, a group of actin-binding proteins. Each protein in the Ena/VASP family has a distinct association with actin; EVL has been characterised to promote the generation of actin filament bundles.

Further results demonstrate ER binds to the EVL gene upon exposure to oestrogen, indicating EVL is indeed a transcriptional target of ER. A positive correlation between levels of EVL and ER was also identified, meaning; the more ER in a cancer cell, the more EVL expression is upregulated, thus the more SCABs are formed, and the less likely the cell will disseminate.

Mouneimne’s studies establish two distinct phases of ER+ breast cancer… and are governed by EVL and, by extension, oestrogen levels. 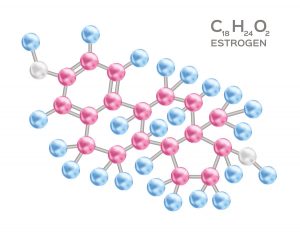 Janody’s and Mouneimne’s studies establish two distinct phases of ER+ breast cancer, the growth phase and the dissemination phase, are governed by EVL and, by extension, oestrogen levels.

Furthermore, Mouneimne’s group observed a relationship between breast cancer patients treated with anti-oestrogenic therapy and a reduction in EVL expression, which was found to be associated with a decrease in ER. Large-scale clinical trials investigating breast cancer incidence in postmenopausal women receiving HRT, in contrast, found an association between HRT and an increased risk of developing primary breast cancer tumours but a reduced risk for cancer dissemination. These results suggest anti-oestrogenic therapy, a treatment for ER+ breast cancer, may actually be increasing the risk for metastatic breast cancer, whilst oestrogen has a protective role against metastasis.

Future implications
Mouneimne’s work highlights the issues of oestrogen’s dichotomous role in ER+ breast cancer: which is the lesser of two evils? Oestrogen increases the risk of primary and recurring cancer but reduces the risk of metastasis, whilst anti-oestrogenic hormone therapy offers a lesser risk of recurring primary cancer but greater risk of metastatic disease. Dr Ghassan Mouneimne and his group’s work is advancing our understanding of the complex reprogramming cancer cells undergo in order to metastasise, as well as elucidating the poorly characterised interactions between hormones and the cytoskeleton. This work is key to develop therapies for ER+ breast cancer that are less paradoxical, and more promising for finding a cure for cancer.

Do you think EVL or the actin cytoskeleton could be potential therapeutic targets for ER+ breast cancer?
Targeting the actin cytoskeleton for treatment of cancer would be challenging and risky since the actin cytoskeleton is involved in many processes that are essential for normal physiology. What we are currently working on is trying to understand what mechanisms drive invasion under ER suppression; if we could figure out these mechanisms, we could target them in combination with anti-estrogenic therapy and thus suppress tumour growth and invasion at the same time.

Research Objectives
Dr Ghassan Mouneimne’s lab at the University of Arizona concentrates on understanding how the organisation of the actin cytoskeleton regulates cellular behaviour and how aberrations in this organisation lead to grave consequences, such as cancer cell invasion and ultimately tumour metastasis. 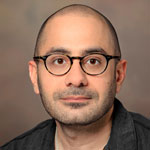 Dr Mouneimne is an Assistant Professor of Cellular and Molecular Medicine and a member of the University of Arizona Cancer Centre. Dr Mouneimne’s expertise is in two areas: analytical cell biology, focused on quantitative cellular microscopy, and cancer biology, focused on invasion and metastasis of breast cancer.

How can the cytoskeleton stop breast cancer spreading? 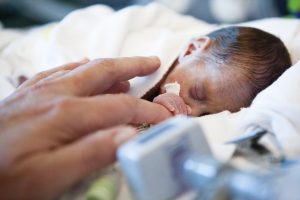 Diagnosis in the genomics era 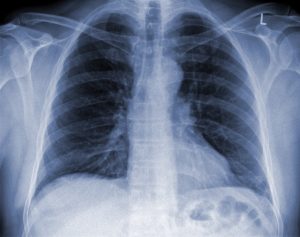 Cystatin 9: the key to effective treatment for bacterial lung disease?